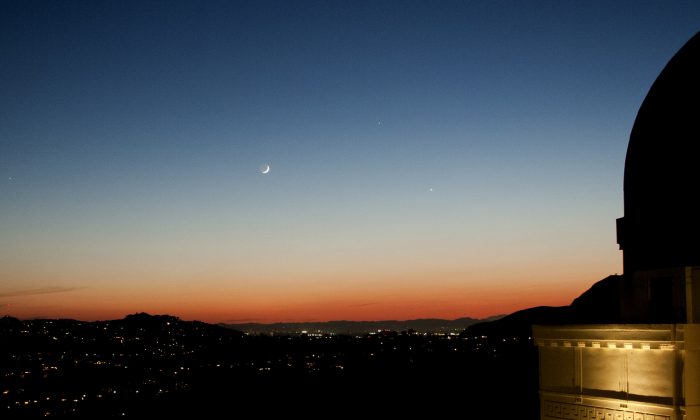 Mercury appears at the top of a triangle with the Moon and Venus on June 10, 2013 (Anthony Cook/Griffith Observatory)
Science

February 2014 Guide to Visible Planets, Including Jupiter and Mercury

Six planets are visible at time during February 2014, including Jupiter, Venus, and Mars.

Venus will be visible in the predawn and dawn sky throughout the month, rising in the east about two hours before sunrise. It reaches maximum brilliance in mid-month. While you usually need a telescope to see Venus, in the first part of February you may be able to see the thin crescent Venus with binoculars.

Jupiter will be visible throughout every night during the month, two-thirds of the way up in the eastern sky. The planet reaches its highest point in the sky at about 9 p.m. local time. February is one of the best months to see this planet, with detail on the planet’s disk, and Jupiter’s four largest moons, visible through telescopes.

Mercury will be visible through February 15, according to the Harvard-Smithsonian Center for Astrophysics, before vanishing until the last day or two of the month. It will be visible low in the west-southwest.

Mars will be visible late at night until shortly before dawn, rising in the east around 11 p.m. local time for most of the month before rising an hour earlier toward the end of the month, according to EarthSky. As it rises sooner in the eastern sky, it brightens as each day passes. However, Jupiter shines many time more brilliantly than Mars.

Saturn, rises in the east-southeast around 1 to 2 a.m. local time, and moving toward midnight by the end of the month. Visible until

On the 15th, Uranus will be visible beginning half an hour after sunset at about 33 degrees above the horizon.