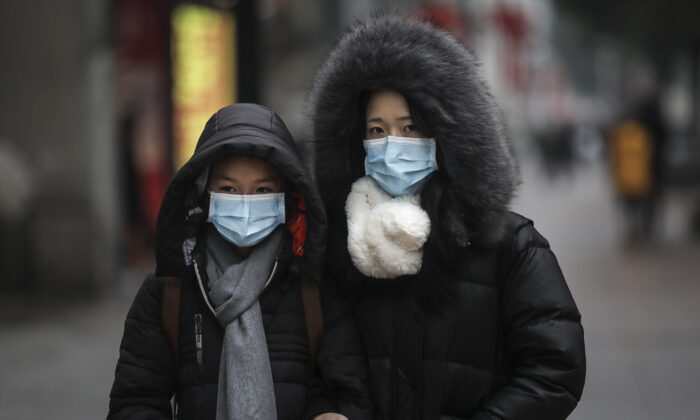 A family wears masks while walking in the street in Wuhan, Hubei province, China, on Jan. 22, 2020. (Getty Images)
By Eva Fu

It started with a light cough. He burped constantly, and complained of shortness of breath.

Family members thought it was no big deal. The doctor said he seemed to have heart problems and suggested him to stay in the hospital. He appeared healthy except for a minor infection in one lung area.

Two weeks later, he was dead, with both lungs infected and organ failure. His doctors at the Wuhan Jinyintan Hospital determined the cause of death as “unknown pneumonia.”

It was days before Chinese health authorities identified the cause of the new viral pneumonia as 2019-nCoV, a coronavirus that first emerged in December in the commercial city of Wuhan, his home city.

As of press time, the virus has since sickened scores of people across China and around the world, with confirmed cases in South Korea, Macau, Hong Kong, Taiwan, Thailand, and the United States.

Much remains unclear about the virus that has sparked fear around the world and cast a cloud over the upcoming Lunar New Year festivities, a major traditional holiday when millions of Chinese travel to their hometowns or go on vacations abroad. Experts say the mass movement of people could accelerate the disease’s spread.

The virus has already spread across the country to 17 provinces and regions.

To the man’s family, his death is far from the end of their sorrows. Among his relatives, five have fallen ill: one is under emergency rescue at a Wuhan hospital; his niece and nephew-in-law also have lung infections but doctors turned them away, saying there’s no space for them at the hospital; two others are also experiencing pneumonia-like symptoms. Buying one dose of medicine means waiting for hours in line.

His sister, currently in Norway, told The Epoch Times that she was being “silenced” by Chinese authorities and not allowed to post anything about his death.

The man is not listed on the authorities’ official death toll, because he did not show any signs of fever, his sister said. She has requested anonymity for fear of reprisal.

“My tears have run dry now,” she said.

She said that if her niece and nephew-in-law does not receive treatment soon, she will ask her family in China to protest on the streets against the authorities.

“We are nobodies without any resources, but we also need to survive.”

Traits of the Virus

Some suspect that the new disease originated from bats, which also carried the first SARS and MERS pathogens, but questions remain as to how far the new coronavirus has changed from its original form.

Coronaviruses are known for their adaptability and can change very quickly, according to Michael Lai, a molecular biologist with the Taiwanese institute Academia Sinica.

“The virus can more easily replicate across humans,” which could make it more contagious, Lai said. “The virus in a patient will continue to evolve … it can easily stay in the community for a very long time,” he said, calling on Chinese authorities to learn from the SARS experience.

Due to the Chinese regime’s initial cover-up, SARS spread from China to more than a dozen countries in 2002 to 2003, killing almost 800 people and infecting more than 8,000.

Ih-Jen Su, who was head of the Taiwan government’s response team to the SARS outbreak in 2002 to 2003, said that given the recent developments, with dozens of new cases each day, “I’m afraid the illness is spreading more quickly and severely than SARS.” Su is also a medical investigator at the National Health Research Institutes in Taiwan.

In that outbreak, the first case appeared in China in November 2002 and spread to Hong Kong and Taiwan in March 2003.

A woman from Wuhan who asked to remain anonymous said she has been wearing masks whenever she goes out.

“I can only avoid places with a lot of people, avoid going out. I don’t know much else [to do],” she told The Epoch Times.

Another Wuhan resident surnamed Pan said they didn’t dare to criticize the government for fear of getting into trouble.

“Hospitals’ businesses are doing well now—lots of people are lining up to see the doctor,” he told The Epoch Times. “Wuhan has become famous.”

In a sign of the severity of the outbreak, Wuhan officials on Jan. 22 announced it was quarantining the city and shutting down public transportation, including the subway, ferries, and airports, to prevent the disease’s further spread.

A nurse at the Wuhan Xiehe Hospital said staff were not allowed to resign nor leave the city. Another nurse at her department had already gotten sick, she said.

In one hospital alone, more than a dozen healthcare workers have also been infected, according to Chinese authorities. Cases like this made molecular biologist Lai suspect the presence of “superspreaders”: a single patient who can infect many people.

Laurie Garrett, a health science analyst and former journalist who won the Pulitzer Prize for her coverage of the 1995 Ebola outbreak, suggested that intensive respiratory care work could expose healthcare staff to the dangerous virus, if their whole body is not fully covered, including the hair and eyes.

Drawing on her previous experience covering the 2002 SARS outbreak, Garrett said inadequate protective measures could lead to infected workers exposing more people to the virus through their contact with other patients.