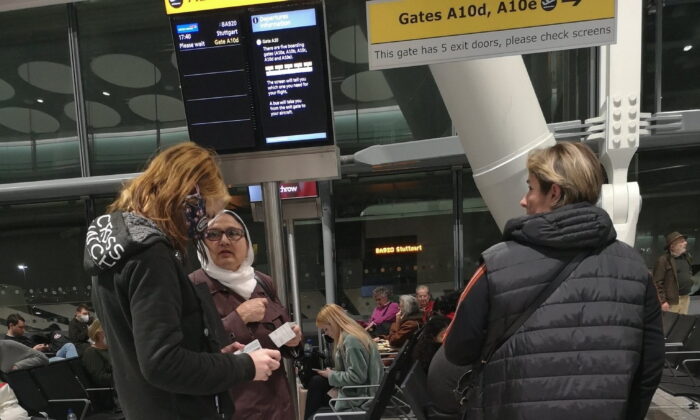 Fears over Easter travel chaos are rising as more flights were cancelled and plans to boost cross-Channel ferry services were blocked.

On Wednesday, British Airways axed at least 53 flights planned for domestic or European routes to or from Heathrow, while easyJet cancelled 23 Gatwick flights.

Hundreds of UK flights have been cancelled in recent days.

Easter getaway delays are expected to build in Kent as another P&O Ferries vessel was detained.

This casts major doubts over the firm’s bid to resume sailings between Dover and Calais this week.

Drivers are being warned to expect long queues on the UK’s major roads.

The RAC estimates some 21.5 million leisure trips will be made by car between Good Friday and Easter Monday.

Some petrol stations have run dry due to protests at oil depots by environmental activists.

Rail passengers are also being warned of Easter delays as Network Rail carries out 530 engineering projects costing a total of £83 million.

This includes the closure of the West Coast Main Line between London Euston and Milton Keynes for four days from Good Friday due to upgrades of the existing line and HS2 work.

P&O Ferries suspended most of its sailings after it sacked nearly 800 seafarers without notice on March 17, and replaced them with cheaper agency workers.

It expects to resume using its ships Pride Of Kent and Spirit Of Britain on the Dover-Calais route this week, pending regulatory approval.

But the Maritime and Coastguard Agency has detained Spirit of Britain after “a number of deficiencies” were identified.

Pride Of Kent has remained under detention since March 28.

This has massively reduced capacity for lorries and tourists crossing the Channel, leading to delays on the roads approaching the Port of Dover.

Shapps told BBC Radio 4’s Today programme: “I think certainly this weekend will be extremely busy on our roads, potentially at our ports, of course, particularly at Dover, where P&O disgracefully sacked all of their staff and then attempted to run ships which wouldn’t have been safe with the replacement below minimum wage staff they tried to hire quickly, and we know that none of their ships are running at the moment.

“So I do expect there to be disruption, with no thanks to P&O there.”

P&O Ferries resumed passenger sailings between Scotland and Northern Ireland on Monday, while full services between Hull and Rotterdam restarted on Wednesday.

Flight cancellations and long queues at airports such as Birmingham, Heathrow and Manchester have been blamed on difficulties recruiting new staff and the time it takes for their security checks to be processed, as well as increased levels of coronavirus-related sickness.

British Airways decided last month it would reduce its schedule until the end of May to avoid the need to cancel flights at short notice.

It has focused on routes with multiple daily flights, meaning passengers can be offered alternative departures on the same day they booked.

EasyJet said cancellations are being made “in advance to give customers the ability to rebook on to alternative flights”.

Chief executive Johan Lundgren said on Tuesday that it is running 94% of its planned schedule.

The number of flights is 78% of the total for Easter 2019, before the virus crisis affected travel.

The busiest day will be Good Friday when some 2,430 flights are due to depart.

Shapps said: “I am very concerned that the operators—I’m talking about the airlines, the airports, the ports—do ensure that they get back to strength and quickly.

“They lost a lot of people during the pandemic.

“We have been warning them for a long time that they would need to gear up again and I’m very keen to make sure that they do everything possible to manage what I realised will be and always is in fact, the Easter weekend – a very busy weekend on our transport system.”