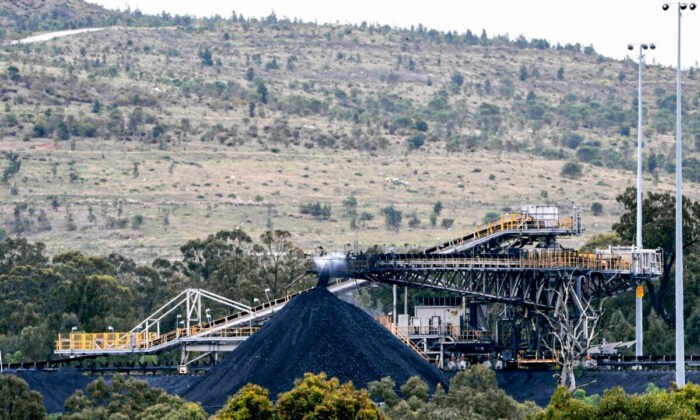 This picture shows a conveyor bridge dumping soil and sand removed at another area of the mine in the town of Singleton, in Newcastle, Australia, on Nov. 5, 2021. (Saeed Khan/AFP via Getty Images)
Economy

State treasurers spoke out against the imposition of environmental, social, and governance (ESG) scoring on public money in a June 8 press conference, with one official comparing it to the social justice-driven push for universal homeownership that helped trigger the Great Recession.

“I would be very concerned about investing in green energy right now,” Utah State Treasurer Marlo Oaks said in response to a question from The Epoch Times.

He didn’t rule out the possibility of an ESG bubble similar to the housing bubble that burst during the late 2000s—an event that drove the nation’s worst economic downturn since the Great Depression.

That bubble was inflated, in part, by two government-sponsored enterprises, Fannie Mae and Freddie Mac.

Beginning in earnest with the Clinton administration’s 1995 National Homeownership Strategy, which committed to “expanding creative financing” for home buyers, the firms continually reduced the requirements for loans.

By 2006, 43 percent of first-time homebuyers put down no deposit, according to a study from the National Association of Realtors.

In contrast to the “invisible hand”—Adam Smith’s metaphor for the operation of the free market—Oaks sees ESG as an “invisible fist.”

Oaks was one signatory to an April 21 letter from Utah’s governor, senators, congressional representatives, and other public officials in response to S&P Global’s issuance of ESG ratings for U.S. states and territories.

“Considering recent global events, the current economic situation in the United States, and the unreliability and inherently political nature of ESG factors in investment decisions, we view this newfound focus on ESG as politicizing the ratings process,” the letter reads. “It is deeply counterproductive, misleading, potentially damaging to the entities being rated, and possibly illegal.”

Idaho officials sent a similar letter to S&P Global on May 18. They echoed the Utah letter’s concerns with the firm’s scoring of U.S. energy companies relative to some of their foreign counterparts.

For example, China’s state-owned Sinopec earned a 41 from S&P Global. ExxonMobil Corp., by contrast, received a 36, while Chevron Corp. received a 39.

Sinopec’s sub-scores on both “social” and “governance and economic” factors were significantly higher than the industry mean.

The results raise questions about the rankings’ reliability in light of the use of forced labor in China, as well as the Chinese Communist Party’s heavy influence over corporate governance in the country.

In an analysis of executive-level shake-ups in China’s oil industry during 2011, experts from the Brookings Institution and Ian Bremmer’s Eurasia Group stated that the movement of leaders from one company to another is “a blatant reminder of the CCP’s control over China’s flagship firms.”

Another speaker at the June 8 press conference, West Virginia Treasurer Riley Moore, made headlines in January when the state divested from Blackrock over its ESG practices.

“In West Virginia, we’re an energy state. We produce coal, gas, and oil—and this ESG movement in its current form is really an existential threat to our jobs, our economy, and our tax revenue,” Moore told reporters.

A law passed by the West Virginia Senate on March 12 will exclude financial institutions from competitive bidding with the state if they’re boycotting fossil fuel companies.

Financial institutions slated for inclusion on West Virginia’s contracting blacklist will be sent letters, allowing them to appeal the decision. The full list will be published 30 days later.

Moore told reporters that those initial letters would likely be sent out at the end of that week. Six companies received such a letter on June 10, including BlackRock, Goldman Sachs, JPMorgan Chase, Morgan Stanley, U.S. Bancorp, and Wells Fargo.

He also suggested that ESG scoring could soon be incorporated into individuals’ credit scores—for example, through favorable mortgage rates for people who put solar panels on their homes.

In a follow-up interview with The Epoch Times on June 8, Moore cited a presentation from J. Michael Evans, president of China’s Alibaba Group, to the World Economic Forum.

Evans said his company is developing an “individualized carbon footprint tracker,” which he claimed would let consumers measure their travel, food consumption, and more.

“You’re going to come to a very logical conclusion if we continue down this path,” Moore told The Epoch Times.

He agreed that the economy could be facing an ESG bubble and argued that coal prices could be an indicator—the international benchmark for a metric ton of coal shot up from less than $50 in September 2020 to roughly $400 on June 8.

“The coal producers are booked out through 2023. They can’t produce any more than they are right now,” Moore said.

In a May 26 opinion prompted by an inquiry from Ball, officials from Cameron’s office concurred that ESG asset management practices run afoul of Kentucky law.

“This isn’t really about profitability. It’s not about retirement security. It’s not about your investments. It’s about political activism. And they’re doing it in a way that they could not do through the democratic process,” Ball told reporters.

Oaks said, “ESG today is misallocating capital, in that it’s not providing capital where it is desperately needed, in the traditional energy space—and it’s leading to higher gas prices.”

Left-wing activists and financiers have celebrated the movement of investments from the hydrocarbon sector, arguing that pressure in that direction is both ethically and financially sound.

“Getting lenders to choke off money to fossil fuel companies is the next needed move for the industry to address the material risks that the coal, oil and gas industry faces,” said Green Century Capital Management’s Leslie Samuelrich, as quoted in a February 2021 CNBC article.

In a February 2021 article for Forbes, “The Case for Fossil Fuel Divestment,” David Carlin wrote, “Fossil fuel mining, exploration, and extraction all are capital intensive activities that demand constant access to capital. If capital costs rise or the supply of capital is reduced, projects can become uneconomical and fossil fuel companies can see their valuations fall.”

He argued that coal, oil, and natural gas companies may face “a grim financial future” if their reserves remain untapped as a result of political or financial pressure, suggesting that divestment advocates are “making a savvy financial decision.”

While ESG has trended in a leftward direction, at least one fund appears to offer a more conservative alternative.

The exchange-traded fund (ETF) Inspire Investing, which claims to offer “biblically responsible investing” in the vein of ESG, has bucked ESG trends by investing in the firearms companies Sturm Ruger & Company and Vista Outdoor, as reported by Bloomberg Law and confirmed by Inspire’s Securities and Exchange Commission filing.

Yet speakers at the June 8 press conference told The Epoch Times that they reject the notion of pushing ESG to the right through state power over public pensions.

“We just want the politics to come back to a neutral base,” said Derek Kreifels, of the State Financial Officers Foundation, noting that the use of public pension funds to advance a political agenda was “the big offense with ESG.”

“If you want to invest in some Second Amendment ETF, please feel free to do it. We don’t want to be forced to invest in that,” Moore said.

Robert Netzly, president and CEO of Inspire, told The Epoch Times, “We believe that the solution to gun violence is not removing firearms from law-abiding citizens, but strong law enforcement removing criminals from our streets.

“We believe state pensions should not be forced to invest along any particular ESG guidelines, but should have the freedom to do so if they decide that is in the best interest of their constituents.”

Representatives for S&P Global and Alibaba Group didn’t respond to requests for comment by press time.