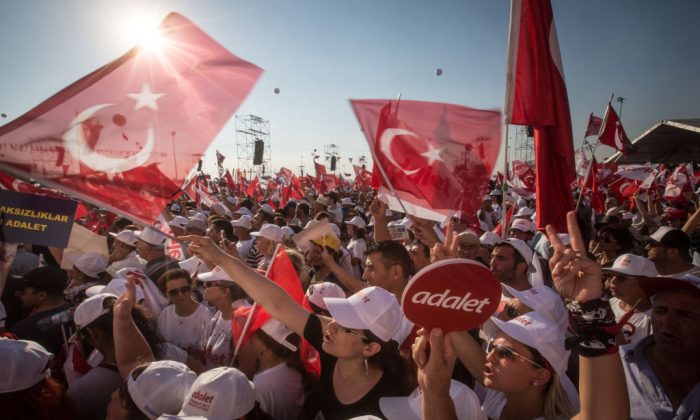 Amid clampdown on dissident voices, demonstrators march from Ankara to Istanbul calling for justice
By Epoch Times Staff
biggersmaller
Print

Tens of thousands of protesters streamed into the Turkish city of Istanbul on July 8, completing a 25-day, 250-mile trek, as part of demonstrations against Turkish President Recep Tayyip Erdogan.

The March for Justice was led by Kemal Kilicdaroglu, the head of Turkey’s main opposition party, the Republican People’s Party (CHP). The trek took him and supporters northwest from the inland capital city Ankara to Istanbul, under the blazing sun and occasional heavy rain. Kilicdaroglu, who has been called “Gandhi Kemal” for his physical resemblance to the Indian independence leader, started the journey with hundreds of supporters and mobilized tens of thousands more along the way.

The march began on June 15, the day after the arrest of Enis Berberoglu, a CHP lawmaker. Berberoglu was sentenced to 25 years in prison for leaking a video filmed in January 2014 that allegedly showed trucks owned by the Turkish intelligence agency carrying weapons to Syria.

Berberoglu, a former journalist, is the first CHP parliament member to be jailed during the government’s crackdown on dissidents following a failed coup attempt last year on July 15.

President Recep Tayyip Erdogan has been criticized for adopting an authoritarian style and moving away from Turkey’s democratic norms and tradition of secularism.

Following the failed coup, Erdogan declared a state of emergency on July 20, 2016, allowing the government to arrest 55,000 people, including 269 journalists and over a dozen lawmakers. The government has dismissed more than 100,000 civil servants.

Since the state of emergency was declared, “Turkey has been ruled by decree,” Kilicdaroglu wrote in an article published in The Guardian on July 6.

Erdogan declared the March for Justice illegal and accused Kilicdaroglu of backing the terrorists, which Kilicdaroglu has denied.

On the road from Ankara to Istanbul, the protesters walked nearly 12 miles each day, chanting “Hak, hukuk, adalet” (rights, law, and justice).

“All we need in Turkey is justice,” said Enver Tutucu, a CHP member from Istanbul who joined the march. He cited the fact that people are detained for hundreds of days without being charged or indicted as evidence of the current corruption.

“We want the state of emergency to be lifted,” he said in a telephone interview.

Despite temperatures of above 100 degrees Fahrenheit, Tutucu said nearly 40,000 people joined the trek on the third weekend.

“I saw elderly couples. Some even came with their babies in strollers,” he said.

Some had a rough time dealing with the heat wave. One party member died of cardiac arrest and another protester was hospitalized with heart spasms.

During the rally, the protesters displayed a giant petition and a placard with a Lady Justice figure.

The march began on June 15, the day after the arrest of lawmaker Enis Berberoglu.
The petition, made by some 300 volunteers, demanded an end to the state of emergency and the unfair trials.

“We could have filed a petition with tens of thousands of signatures, but it would not be that effective as so far such attempts have proven futile,” Avciergun said. But the giant petition, which is 200 feet long and 130 feet wide, attracted a lot of attention, he said.

“There is strong pressure on the opposition media in the country. They are silenced or closed. Most people turn to international media to get their news. This is very sad and there is a growing reaction to it,” he said.

Twelve journalists working for Turkey’s Cumhuriyet newspaper have been detained for more than eight months.

Kilicdaroglu initially planned to end the march in front of the prison in Istanbul where Berberoglu is being held. Instead, he decided to hold a massive rally.

“We walked for lack of justice. We marched for the rights of victims, jailed lawmakers, and journalists,” Kilicdaroglu said while addressing the rally.

“We walked because we are against a one-man regime and FETO,” he said.