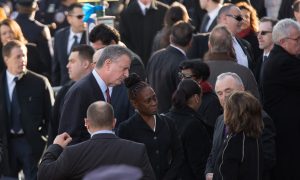 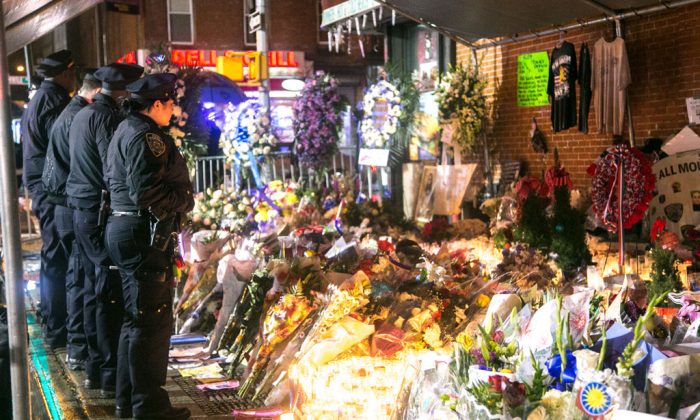 New York Police Department officers visit a makeshift memorial in Brooklyn, New York, on Dec. 24, for the officers who were murdered in their police car by an emotionally disturbed man. (Benjamin Chasteen/Epoch Times)
New York

NEW YORK—”Daddy, why does everybody hate the police?”

NYPD Detective Martin Green’s son posed the question to his dad three days after two police officers were shot and killed in Brooklyn by an emotionally disturbed individual, targeted for their uniform.

“As much as I try to get him to watch SpongeBob, he knows. It’s not hard to miss,” said Green, a detective specialist and auxiliary unit coordinator. “He’s said he wanted to be like Daddy one day, so he’s very concerned.”

Some police supporters point fingers at the mayor for allowing slogans like ‘What do we want? Dead cops!’ to be uttered.

Despite his dad’s best efforts, the 5-year-old had noticed New York City’s ambivalent, sometimes reproachful attitude toward its police force.

Some police and police supporters believe the two killings on Saturday came precipitated by a climate of anti-police rhetoric, fostered by community leaders calling for police reform and accountability, and weeks of street protests against police brutality. Some point fingers at the mayor for allowing the protests to continue, and protesters to utter slogans like, “What do we want? Dead cops!”

The double homicide of officers Rafael Ramos and Wenjian Liu has left city police tense and their families worried. Officers escort each other, even to the bathroom, and an additional almost $400 million outside of the city budget has been invested in increased security measures in recent months.

For families of current officers, the shooting incident is also frightening for what it could imply for the officers’ well-being.

“They’re shaken,” said retired police Capt. Joseph Concannon, who is a 25-year veteran of the department. In the last week he has attended many candlelight vigils and prayer sessions to honor the slain officers and share in sympathy with their families. “They’re beyond the pale upset,” he said of the families.

Concannon said that he spoke with the worried wife of a police officer Monday evening. “She was so grateful that her husband had taken Christmas off and a few days in between. She said, “Well, at least we’ll be okay for those three days.”

Green said that his wife told him that she had never worried about him a day in her life before, but following Saturday’s tragedy, she had grown “really nervous.”

“As a sister of a police officer, this is a horrible feeling, because every night he’s on patrol, it’s hard for us to sleep or know whether or not he’s going to come back,” said Marilyn Sleck, who resides in Williamsburg, Brooklyn and whose brother patrols on Staten Island. “It’s very tense.”

Sleck said that her brother, who had known Ramos, was too distraught to share his memories of him. “My brother is so secluded, he can’t even speak.”

In public speeches both the mayor and police commissioner have referred to New York in the seventies, a time when racial tensions were at a frustrating high. Sixty NYPD officers were killed by gunfire on the job from 1971 to 1980, according to police data.

From 1971 to 1973, the radical Black Liberation Army (BLA), an underground, militant organization composed of many former Black Panther members, would target officers and assassinate them. The BLA also exchanged gunfire with officers in at least 20 instances, according to a 2011 paper by Arizona State University criminal justice professor Michael White.

Police officers need to be on point and on guard.
— Derek Wright, former police detective

In the ’70s, the NYPD laid off thousands of officers due to budget cuts. Patrolmen were also not allowed to make low-level drug arrests and, instead, had to watch drug deals occur and report their observations to superiors, according to a Yale School of Management case study from 2008. Crime festered, increasing sevenfold by 1990, compared to numbers in 1960.

Some of the security measures police are following, including doubling up on patrols and tightly guarding station houses were taken from the pages of a how to survive the ’70s guidebook, according to police interviewed for this story.

Concannon said, “People are in complete shock that this city could reverse direction, 180 degrees, in one year.”

On Sunday evening, Dec. 21, a man walked into the 28th precinct in Harlem and broke an officer’s arm during a scuffle. Bomb threats were called in to two police stations in Brooklyn and Queens in the middle of the week. Police have looked over hundreds of online posts and investigated 40 threats, according to the NYPD. Half of the investigations were closed or referred to other agencies. Four arrests have been made.

Others feel that the targeted police murder was an isolated incident. Neil Blaney, a third grade detective in the 111th Precinct in Bayside, Queens, said that although he and his wife were being even more vigilant about safety than usual, the 28-year-old fugitive, Ismaaiyl Brinsley, from Maryland, was “a lone, disturbed individual.”

Derek Wright, a former police detective who spent 20 years on the force, said he wouldn’t draw comparisons with the ’70s because he doesn’t believe Brinsley’s murders were racially motivated.

“If he was rational, and this was meant as a racial thing, you don’t think he could have waited until he saw two white cops together?” asked Wright, adding that Ramos was Hispanic and Liu was Asian. “He shot two cops. He was looking for authority figures.”

People are in complete shock that this city could reverse direction.
— Joseph Concannon, retired police captain

Brinsley had first walked by the marked police car and observed the police officers inside before pulling his gun. After firing four bullets, striking both officers in the head, Brinsley then fled to a nearby subway station and took his own life.

Brinsley had claimed on Instagram that he was taking revenge for Michael Brown and Eric Garner, unarmed black men whose deaths were caused by white police officers that grand juries did not indict.

Protesters have marched in solidarity with Brown and Garner for weeks, expressing concerns about police racism and excessive use of force. In New York the protests have largely been peaceful and respectful.

Still, with threats against the police being made, Wright said that it’s a more dangerous time now than even a few months ago.

“Police officers need to be on point and on guard,” said Wright. “The evil lurks around them everyday.”