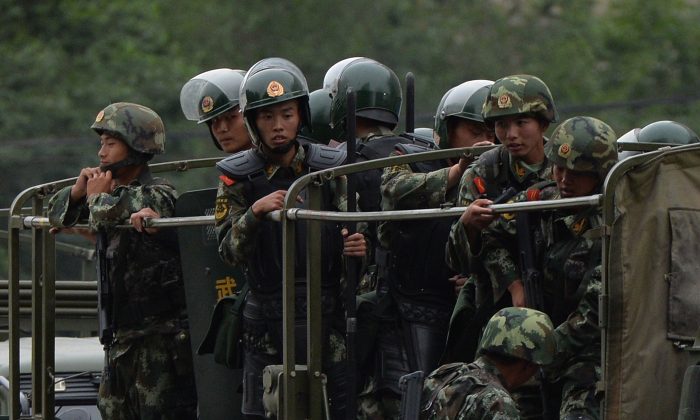 Chinese paramilitary police prepare to ride in trucks during a 'show of force' ceremony in Urumqi on June 29, 2013. The Chinese regime is revising laws to prevent military information leaks. (MARK RALSTON/AFP/Getty Images)
China

The Chinese regime is growing more concerned about whistleblowers, particularly within its military. It has launched a broad campaign to reiterate and strengthen what are mainly existing laws to prevent information from leaking out.

A revised version of the Chinese regime’s Military Grassroots Construction Guidelines was released on Feb. 4 by the Central Military Commission (CMC). The military security revisions come in light of the updated Counterespionage Law released last Fall.

In a recent report from Peter Mattis of The Jamestown Foundation, he notes the new guidelines highlight the Chinese regime’s and its military’s concerns around foreign espionage, leaks, and risks of information getting out through cell phones and Internet access.

“Taken in context, the CMC regulations and their measures for curbing security leaks are part of a broader campaign that reflects China’s insecurity,” Mattis states.

The Chinese regime has reason to fear leaks. In the United States, Edward Snowden has been making headlines around the world with stolen documents about the NSA’s spying programs. Leaks from China would be much different than just news about spying on citizens, going by the bit of information that has made it out.

For example, the Chinese regime’s military is involved in the black market trade of human organs, often taken from prisoners of conscience—in large numbers from Falun Gong practitioners, but also from Tibetans, Uighurs, and Christians.

A former Chinese hospital intern recently came forward in Canada and exposed similar black market operations being run by the Chinese regime’s military. He told Epoch Times in detail how he and other military doctors removed the kidneys, eyeballs, and other organs from a male prisoner who was not even 18 years old.

Ultimately, these guidelines reflect the continuing insecurity of a China that, prior to Reform and Opening, once shut down foreign espionage.
— Peter Mattis, The Jamestown Foundation

Of course, the Chinese regime’s revised laws are likely not just about covering up its human rights abuses. It’s also about keeping a tight lid on its military programs, in general.

Just several days after passing the revised security laws, the Chinese regime announced it arrested two individuals for selling photos of China’s Liaoning aircraft carrier to what it says were foreign spies.

What’s particularly interesting about the new espionage laws in China, according to the report from The Jamestown Foundation, is that despite all the hype from Party leaders and state-run press, the laws don’t really introduce anything new.

The revisions and reiteration of the laws, according to the report, “suggests China’s counterintelligence authorities are seeing a lot of disconcerting behavior by Chinese civilian and military officials or hostile activity that they cannot explain or trace back to leaks.”

“Ultimately, these guidelines reflect the continuing insecurity of a China that, prior to Reform and Opening, once shut down foreign espionage,” it states, noting that in the years since the former Chinese leader Deng Xiaoping opened China to the rest of the world, just after the 1989 Tiananmen Square Massacre, China “has faced foreign intelligence services increasingly capable of accessing China’s secrets.”

The revised Military Grassroots Construction Guidelines include a few changes meant to dissuade or prevent dissent.

One revision is a reminder about the Chinese regime’s tight control over electronics, and if put into practice could deeply affect its operations. The report says the Chinese Military Commission wants greater control over, “if not outright bans of,” cellular phones, Internet access, and outside contact using electronics while stationed.

Another revision is for basic morale. The Chinese regime is trying to discourage soldiers from getting pushed over the edge by banning military officers from using corporal punishment on soldiers, “encroaching their interests,” and banning them from assigning soldiers with personal tasks or bribing the officers.

It also reiterates the requirements for psychological evaluations in background checks.

To help enforce the new focus, the Chinese regime has accompanied the revisions with a propaganda campaign focused on counterespionage. While the programs themselves are more focused on whistleblowers and internal leaks, the state-run media has been trumpeting it with propaganda about combating foreign spies.

“In many ways, Beijing’s concern with espionage cannot be separated from the larger context of the Party’s concern with ideological subversion,” states the report.

Recently, the Chinese regime has been launching a broader campaign meant to strengthen the rule of the Communist Party and has validated this by labeling Western thought as foreign threats. The report states, Chinese leaders recently named “Western-style constitutionalism, universal values, and neo-liberal economics as threats to the regime that required the Party to reassert ideological dominance.”