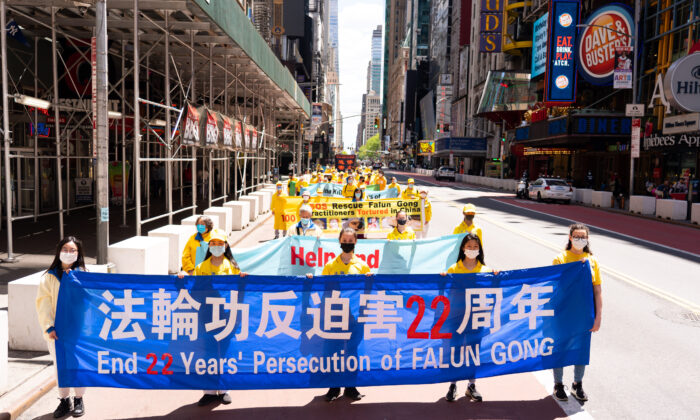 Practitioners of the spiritual discipline Falun Gong hold a parade to celebrate World Falun Dafa Day and to protest the ongoing persecution of the group by the Chinese Communist Party in China, in New York City, on May 13, 2021. (Larry Dai/The Epoch Times)
Thinking About China

Fear and Loathing in Beijing

Why is the most tyrannical regime on Earth waging war against the most peaceful of religions and practices?

Why does the Chinese Communist Party (CCP) go out of its way to persecute and destroy Christian believers and Falun Gong practitioners?

What are the CCP’s brave, omniscient, and brilliant leaders afraid of?

Who’s Afraid of the Meek and Mild?

When it comes to religious persecution in China, what’s going on in the hearts and minds of the CCP?

What, on God’s green Earth, is Xi Jinping afraid of?

Surely, the Party leaders don’t fear the meek followers of Jesus Christ, who told His followers to “love your enemy” and “turn the other cheek.”

And undoubtedly, the Party couldn’t possibly have any rational fear of the peaceful folks who practice calm and mild Falun Gong. How could performing slow motion exercises and meditation in the park threaten the CCP?

Logically, the CCP, with all its might and control over virtually every aspect of the lives of all its citizens, can’t be even remotely threatened by folks like these who are unarmed and reject violence.

And yet, those two groups are exactly who Xi Jinping and the Party fear most.

A Party of Fear

First and foremost, it’s important to understand that the CCP has a pervasive monopoly on fear. This fear manifests itself in critical and elemental behaviors and in decisions such as rising consumer savings rates (34 percent) to a plunging population. People don’t spend money or have children when they’re fearful of the future.

What’s more, the CCP embodies fear itself and runs on fear. That may sound contradictory, but it’s actually quite accurate. Every Party member is utterly fearful of saying the wrong thing, or even being accused of thinking the wrong thing. The entire CCP is full of men and women deathly afraid of incurring the wrath of the CCP leadership.

And finally, the CCP leadership itself is saturated with fear. That particular strain of anxiety is best described as paranoia, and is what accompanies all illegitimate regimes without exception.

Legitimate leaders are comfortable with opposition and don’t require or resort to secret police or state-sponsored terror to remain in power. However, throughout the reign of the CCP, Party dictators and leaders have never been able to tolerate the first or survive without the latter two. The fear-tyrant calculus is simple: The more illegitimate the country’s leadership, the more tyrants fear being deposed by a political rival or even by the people themselves.

Furthermore, it’s no coincidence that, like Mao Zedong’s purges of the past (and Joseph Stalin’s for that matter), Xi uses political purges to eliminate real and perceived enemies of the revolution, of the state, or of his leadership.

Of course, these official actions are conducted under the guise of “rooting out corruption,” which is simply a convenient euphemism. The reality is that the entire Chinese economy and political structure are based on cronyism, theft, and deceit. The real purpose of Xi’s purges is to eliminate not corruption, but political rivals. As a bonus, the purges also serve to strike fear in the hearts of everyone else.

China’s social credit system serves a similar purpose, applied across society at large. It, too, involves identifying people who may say, write, read, or think “the wrong way.” It then results in some form of corrective measures such as losing a job or transportation privileges, or even purging offenders from society altogether. It can reasonably be asserted that all of China lives in fear.

The Other Half of the Fear Equation

But that fear, as comprehensive as it most certainly is, is only half of the equation. The CCP also fears religious and spiritual beliefs and practices. The Chinese regime’s abhorrent and brutal treatment of Muslim Uyghurs, which includes forced labor, re-education camps, and sexual abuse of Muslim women, is clear evidence of Beijing’s loathsome view of the Uyghurs.

That brings us back to Christianity and Falun Gong.

Beijing’s capacity for loathing and persecuting the spiritual and religious is broad and deep. Even more than its fellow Party members, the CCP fears Christianity and its believers, as well as Falun Gong and its practitioners. The reason is a simple one: A material-based ideology, which communism most certainly is, simply cannot enrich the heart, mind, and soul the way transcendent spiritual beliefs can.

Hence, the CCP is deathly afraid of people praying to a God who it insists does not exist. And yet, Christianity is spreading across China “like wildfire.” Furthermore, physical persecution and material deprivation don’t quell the Christian faith, but only strengthen it. The worse the conditions become, the more the numbers of believers grow. Beijing may well benefit from revisiting the history of Christianity in the Roman Empire.

In fact, Beijing tries to downplay the number of Christians in China, with an official count of about 44 million. But the reality is that in 2020, there were about 116 million Protestant Christians in mainland China, most of them in underground churches.

More worrisome for the CCP, by 2030, China will lead the world in the number of Protestant Christians. Ironically, Xi fears the rise of Christianity in China so much that in a most sincere exercise in flattery, he has replaced God’s Ten Commandments with his own.

Marxism Is No Match for Ancient Wisdom

As for those millions who practice Falun Gong, they, too, obtain a metaphysical contentment and condition of physical wellbeing that the communist ideology can’t hope to provide. With a metaphysical outlook borne out of religious traditions of Buddhism and Taoism, the values, wisdom, and precepts of Falun Gong—truthfulness, forbearance, and compassion—precede and supersede the base brutality of the CCP by thousands of years.

Beijing’s response has been to subject Falun Gong followers to a variety of persecutions, including incarceration in labor camps and forcing them to become live organ donors. But, like Christianity, these harsh measures have failed to stop the spread and practice of Falun Gong in China and the rest of the world.

In the end—and there will be an end to the CCP and its tyrannical rule—those who persecute and enslave will be found wanting in the judgment of both mankind and God. If the CCP were wise, which it is not, it would fear both, but especially the latter, and cease the persecution of their fellow human beings. It would also realize that for all of us, our time on this Earth is short and what follows is, well, eternal.