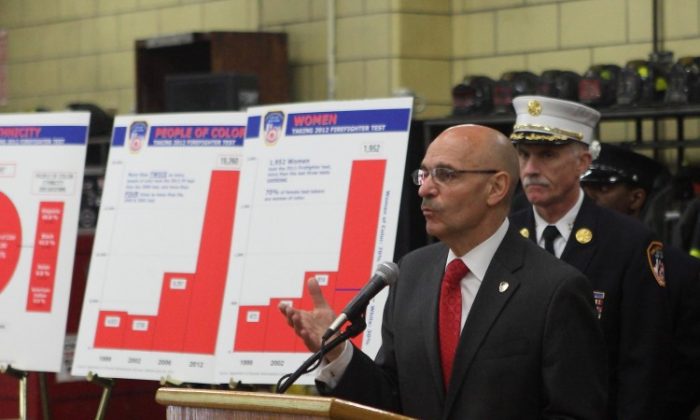 Fire Commissioner Salvatore J. Cassano announced a record setting number of applicants for the firefighters exam, which was given between March 15 and April 20, at the quarters of Engine 37 and Ladder 40 in Harlem on Tuesday.(Gary Du/The Epoch Times)
US

“[W”re] proud to have assisted the FDNY’s efforts to make this test available to a historic number of candidates,” Department of Citywide Administrative Services Commissioner Edna Wells Handy said in a statement.

“The extraordinary efforts we made to reach people of color and woman and interest them in the firefighter exam has been an unprecedented success,” said Fire Commissioner Salvatore J. Cassano, according to the statement.

One million dollars was spent on print advertising for the exam. Social media also played a big role in recruitment with 14,000 questions from applicants coming through social media channels.