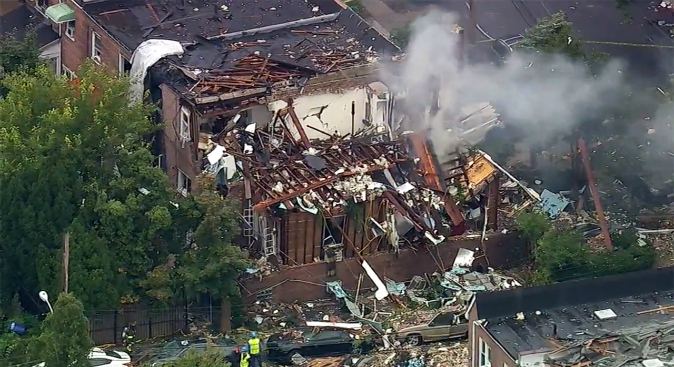 In this frame from video provided by WABC-TV, smoke rises from a house that exploded in the Bronx borough of New York on Tuesday, Sept. 27, 2016. Authorities said firefighters responded to a report of a gas leak right before the house exploded. (WABC-TV via AP)
New York

A large explosion in the Bronx triggered by a possible gas leak left a FDNY captain dead, 20 others injured, and a neighborhood covered in smoke.

Firefighters were called to a home on W. 234th St. near Irwin Ave. on Sept. 27 after receiving a report about a gas leak at around 6:22 a.m. local time, officials said. Once inside, they discovered an illegal drug laboratory and contacted police.

The two-story private dwelling exploded shortly after firefighters arrived at around 7:30 a.m.—before police officers were able to investigate the alleged drug den.

Two weeks ago, investigators had received information about a possible marijuana grow house at the residence and were in the earlier stages of an investigation, said NYPD Commissioner James O’Neill.

Battalion Chief Michael Fahy was directing operations from the street when he was struck by flying debris, said Fire Commissioner Daniel Nigro. He was rushed to New York Presbyterian/Allen Hospital, where he died.

“It’s a very sad day for our city,” said the mayor. “We had a tragedy today.”

Explosives in NY, NJ Were Made With Easy-to-Get Materials

Also injured were six police officers, two civilians, three Con Edison employees, and nine additional firefighters. All were taken to area hospitals and are expected to survive. The extent of their injuries are unknown.

“It was a big explosion, big explosion,” neighbor Jay Soto, 57, told the New York Post. “Everyone came out and asked, ‘What was that?’ I could see that it was serious. There are many ambulances and firetrucks. I saw black smoke.”

Erik Maldonado posted images of the scene to Instagram.

“Felt like a bomb went off. Shook my whole building. Scared the [expletive] out of me and my son this morning. Watching cops and firefighters walking around bloody. Not a good morning :(,” he captioned a photo of a partially collapsed roof.

Several images of the scene showed debris strewn on sidewalks and atop parked cars.

House explosion in the Bronx 1 PD MOS to the hospital pic.twitter.com/SXEGaSfpvf

Traffic delays are expected in the vicinity of Tibbett Ave and 234 St. as firefighters, police officers, and utility workers have cordoned off the site.

Bronx Congressman Eliot Engel offered his condolences in a tweet shortly after the incident.

Prayers to the civilians and 1st-responders injured in this morning’s Bronx explosion, and we mourn the loss of our brave @FDNY chief.

This is the second explosion to rock New York City in recent weeks. Suspected terrorist Ahmad Rahami was arrested for planting bombs in the Chelsea neighborhood as well as cities in New Jersey. In those incidents, no casualties were reported.

The Bronx explosion is still under investigation.