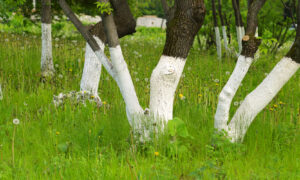 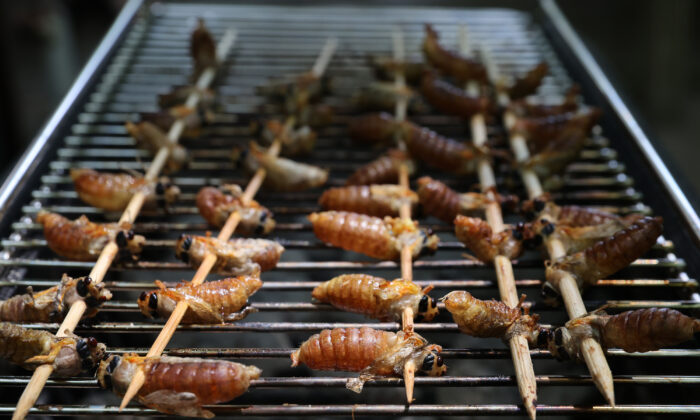 Cicadas are grilled on charcoal in Crofton, Md., on May 22, 2021. (Chip Somodevilla/Getty Images)
Education

FDA Warns People With Seafood Allergies Not to Eat Cicadas

Eating cicadas—fleshy insects that some people see as a tasty delicacy—is ill-advised for people allergic to seafood, the Food and Drug Administration (FDA) has warned.

“Yep! We have to say it! Don’t eat #cicadas if you’re allergic to seafood as these insects share a family relation to shrimp and lobsters,” the agency said in a Wednesday tweet.

Don’t eat #cicadas if you’re allergic to seafood as these insects share a family relation to shrimp and lobsters. https://t.co/UBg7CwrObN pic.twitter.com/3qn7czNg53

The FDA’s post elicited mixed reactions, with some netizens questioning why anyone would willingly consume these—or any other—insects. But experts say eating insects, which are rich in protein, iron, and zinc, is not that unusual.

“[It’s] really common around the world to eat insects seasonally, for their taste, for their nutritional importance,” Jessica Fanzo, a professor of food policy and ethics at Johns Hopkins University, told CBS in a recent interview. “And even here in the United States, some Native American populations consumed cicadas in times of hardship.”

Eating cicadas is also increasingly being viewed as a novelty edible by foodies in North America. Of particular interest are so-called Brood X cicadas, which spend years underground as nymphs before emerging en masse throughout the eastern United States in cycles that occur once every 17 years, roughly. The previous Brood X emergence was in 2004, and now, 17 years later, there’s one afoot in 2021.

The current wave of emergent cicadas has sparked a flurry of interest and recipes, including cicada cookies, spicy popcorn cicadas, and skewered cicadas roasted on a grill.

“They’re delicious,” said Cortni Borgerson, assistant professor of anthropology at Montclair State University, in remarks to NJ.com. Cicadas “will taste like shrimp. The taste and texture are very similar, but with a fresh spring twist to it … similar to if you’re eating fresh asparagus, spring arugula, or parsley.”

While the issue of allergies related to eating insects is not yet well understood by the scientific community, a recent report by the UN Food Agricultural Organization noted that “individuals already allergic to crustaceans are particularly vulnerable to developing allergic reactions to edible insects, due to allergen cross-reactivity.”

Eating insects has also emerged as something of a culture war issue, with some progressives and environmental groups advocating insect-eating as a way to reduce the carbon footprint associated with traditional meat production, and traditionalists denouncing such ideas as radical.

There have been a number of arguments in this regard, like those made by the Environment Journal, that “feeding the world’s growing population will require a radical re-balancing of the global food supply chain” and “foods made from insects, worms, and grubs may be rising up the menu.” And, as The Scientist magazine put it in an article: “Eradicating extreme poverty and hunger, and reducing child mortality rates, can be directly addressed by expanding consumption of edible insects.”

Marc Morano, author of the book “Green Fraud: Why the Green New Deal is Even Worse Than You Think,” said in a March interview with Epoch TV’s “Crossroads” program that there have been talks among proponents of the Green New Deal that range from abolishing private car ownership and the internal combustion engine, to shifting away from eating natural meat in favor of plant-based and lab-grown substitutes.

“They’re pushing insect-eating,” Morano said in the interview, in which he argued that Green New Deal advocates seek radical change and want to control “every aspect of your life.”