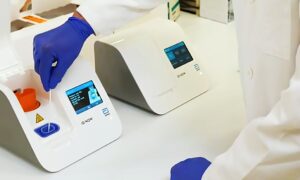 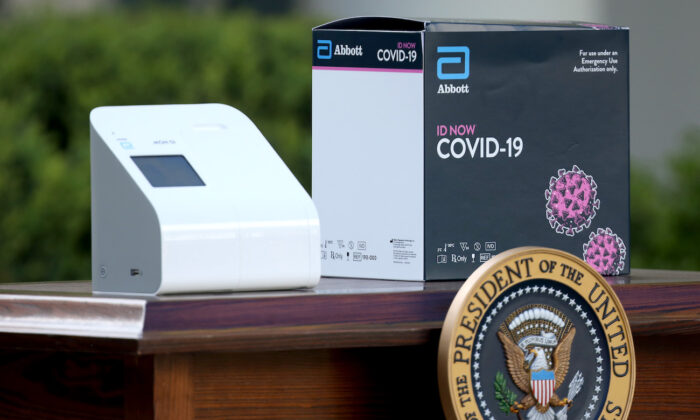 A new COVID-19 test kit developed by Abbott Labs in the Rose Garden of the White House in Washington on March 30, 2020. (Win McNamee/Getty Images)
AMERICA

The U.S. Food and Drug Administration (FDA) on Thursday said that Abbott Laboratories’ point-of-care test, “Abbott ID NOW,” which has been widely used to diagnose COVID-19 in under 15 minutes, could potentially yield inaccurate results.

“This test can still be used and can correctly identify many positive cases in minutes,” said Tim Stenzel, director of the Office of In Vitro Diagnostics and Radiological Health at the FDA. “Negative results may need to be confirmed with a high-sensitivity authorized molecular test.”

“The FDA has received 15 adverse event reports about the Abbott ID NOW device that suggest some users are receiving inaccurate negative results,” the agency announced on its website. “The agency is reviewing these reports. It’s important to note that the adverse event reports the FDA receives from manufacturers, health care providers, health care facilities, and patients can be incomplete, inaccurate, or unverified, so agency staff must meticulously comb through the reports to identify crucial data to support any signals or patterns about device use.”

Stenzel said that the FDA is “in direct communications with Abbott about this important issue” and “are working with the company to create additional mechanisms for studying the test.”

The FDA in late March approved (pdf) Abbott’s test for emergency use to test for the CCP (Chinese Communist Party) virus, also known as the novel coronavirus. Abbott Laboratories, a health care company based in Illinois, said the test can deliver positive results in as little as 5 minutes and negative results in 13 minutes.

President Donald Trump described the FDA approval at the time as one that opened up “a whole new ballgame” in enabling the company to make widely available a test that “delivers lightning-fast results.”

Abbott has distributed about 1.8 million ID NOW tests to healthcare facilities across all 50 states, and the reported rate of false negatives is at 0.02 percent, according to the company. The administration has shipped more than 235,000 of the tests to state public health laboratories across the United States “to make sure that that point-of-care testing capability is there to research outbreaks,” the president said earlier this week.

The test is also being used daily at the White House to test President Donald Trump and key members of his staff, including the task force dealing with the CCP virus.

“We’re currently manufacturing 50,000 tests per day, plan to increase ID NOW manufacturing capacity to 2 million tests a month by June and are working to expand beyond that,” Abbott said on its website.

The FDA’s latest public warning on the Abbott test comes a day after New York University researchers reported results (pdf) that suggest the test can miss a number of infections that were detected by a test made by rival company Cepheid. The NYU research involved 100 people and has not been published in a medical journal, nor has it been peer-reviewed.

In particular, NYU researchers said that Abbott’s ID NOW test missed one-third of the infections caught by Cepheid’s test when the swabs were stored in liquid used to transport lab samples. When the samples were kept dry, the test missed some 48 percent of cases that Cepheid’s test picked up.

Abbott said in a statement on Thursday that there are studies that are using its ID NOW test “in ways that it was not designed to be used.” The company also said that “ID NOW is intended to be used near the patient with a direct swab test method.”

“The availability and ease-of-access of ID NOW, which delivers results in minutes rather than a day or more, is helping to reduce the risk of infection in society by detecting more positive results than would otherwise be found,” the company asserted.

Abbott also pointed to other independent study results that found that its test had accurately detected 90 percent or more infections.

“For example, in another recent study in Washington state, out of approximately 1,000 subjects there were 23 positive for COVID-19 on a lab test and ID NOW picked up 21, demonstrating 91 percent sensitivity and 100 percent specificity,” Abbott said in a Wednesday statement. “We have many questions for the [NYU] study authors.”

“While no test is perfect, Abbott’s ID NOW is delivering reliable results when and where they’re needed most. The test is performing as expected by the more than 1,000+ sites using ID NOW for COVID-19,” the company added.

On April 15, Abbott issued additional information and direction for its test to explicitly warn against putting patient samples in transport chemicals.

“Some of our hospital and academic laboratory users have been validating our ID NOW COVID-19 rapid test (part of a lab’s normal process) with the use of viral transport media (VTM) samples. VTM is a liquid solution used to store, preserve, and transport a virus sample. This method can reduce the sensitivity of the test through dilution, which can potentially lead to false negative results,” the company said in a statement on April 15.

“In consultation with the FDA, we have instructed our customers not to use VTM for the ID NOW COVID-19 rapid test. The sample (swab) should be placed directly in the instrument for testing and not placed in any other media. We have updated our product information and are directly communicating with our customers.”

The FDA, also on April 21, issued a letter (pdf) to formally amend instructions for using Abbott’s test, in agreement with Abbott’s update.