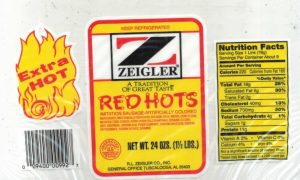 It may sound like a broken record, but the U.S. Food and Drug Administration (FDA) has issued a recall of more blood pressure drugs due to the presence of a potentially cancer-causing chemical.

The “recall is due to trace amounts of N-Nitrosodiethylamine (NDEA) in the losartan active pharmaceutical ingredient,” which was manufactured by Hetero Labs Limited, according to the FDA. NDEA, found in rocket fuel, is classified by experts as a carcinogenic and mutagenic organic compound.

Torrent and Hetero Labs are both based in India.

“Torrent is only recalling lots of losartan medication containing NDEA above the interim acceptable intake level of 0.27 parts per million,” said the FDA.

The agency said that patients taking the recalled medications should keep taking their medicine until their doctor or pharmacist replaces the medications or if the doctor prescribes a different drug.

Earlier in the week, the FDA announced the recall of certain lots of valsartan, another blood pressure and heart drug, made by Aurobindo Pharma USA.

“Aurobindo is recalling lots of valsartan-containing medication that tested positive for NDEA above the interim acceptable daily intake level of 0.083 parts per million,” according to the agency.

A month ago, the FDA provided an update about its ongoing recall of heart and blood pressure medication due to impurities that could cause cancer.

They were distributed across the United States from March 2017 until November 2018, the agency added.

Meanwhile, in December, the FDA issued a warning to Chinese drug manufacturer Zhejiang Huahai Pharmaceutical Co. Ltd. for “several manufacturing violations at ZHP’s Chuannan facility, including impurity control, change control, and cross-contamination from one manufacturing process line to another.”

Zhejiang Huahai Pharmaceutical was also placed “on import alert” by the FDA earlier this year due to impurities in valsartan.