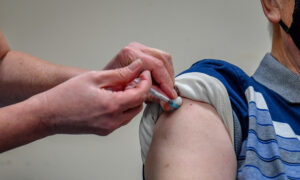 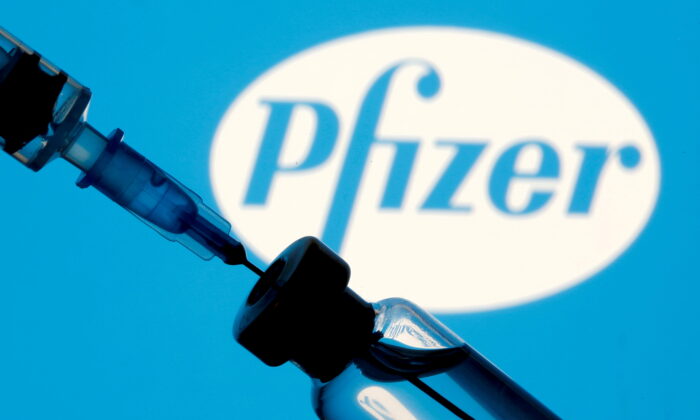 A vial and syringe are seen in front of a displayed Pfizer logo in this illustration taken on Jan. 11, 2021. (Reuters/Dado Ruvic/Illustration/File Photo)
Vaccines & Safety

The Food and Drug Administration (FDA)-approved COVID-19 vaccine from Pfizer and BioNTech should not be prescribed off-label for children under 12, as no data exists on proper dosing or safety in youth, an FDA official said on Monday.

Acting FDA Commissioner Dr. Janet Woodcock told reporters that the federal agency does not believe it would be appropriate for children under age 12 to get the vaccine, saying it “would be a great concern if people vaccinate children because we don’t have the proper data.”

“We don’t have the safety data, nor do we have all the efficacy data, as well,” Woodcock said. “We are not recommending that children younger than age 12 be vaccinated with this vaccine. It would not be appropriate.”

A Pfizer spokesperson said at the time that the company expects data from 5 to 11-year-olds in September and would likely ask regulators for emergency use authorization later that month. Data for children 2 to 5 years old could arrive soon after that, the spokesperson said.

The company also said it is testing a dose on children in the 6-month to 2-year-old age group, and expects to have that data sometime in October or November.

“The clinical trials for the COVID-19 vaccine in children ages 11 years old and younger are underway, and we need to see the data from those studies before we give this vaccine to younger children,” AAP President Lee Savio Beers said in a statement. “The dose may be different for younger ages. The AAP recommends against giving the vaccine to children under 12 (years) until authorized by the FDA.”

Last month, the safety committee of the European Medicines Agency (EMA) concluded that heart inflammation “can occur in very rare cases” and recommended “listing myocarditis and pericarditis as new side effects in the product information for these vaccines, together with a warning to raise awareness among healthcare professionals and people taking these vaccines.”

The Centers for Disease Control and Prevention’s (CDC) advisory committee has maintained that the risks of high inflammation don’t outweigh the benefits of the vaccine and continues to recommend it to children aged 12 and older.

Some scientific experts have questioned whether COVID-19 vaccines are appropriate to give to certain groups of people.

“Typically, the Advisory Committee on Immunization Practices [ACIP] of the CDC would be evaluating risk-benefit ratio for a new vaccine in a vigorous way, using quality-adjust life years,” Malone told The Epoch Times’ “American Thought Leaders” program in July.

“And then the ACIP would come out with a recommendation saying this vaccine is good to be used in the elderly. It’s pretty compelling in this case with these vaccines that, even though there are adverse events, their [the elderly’s] risk of COVID death or significant disease is pretty high. So that’s an easy one to say yes to.

“Adolescents, in contrast, have a very, very low probability of disease or death from COVID. … That calculation doesn’t come out looking so good,” he said.

President Joe Biden said in a statement on Monday that the FDA’s licensure of the Pfizer vaccine “should give added confidence that this vaccine is safe and effective.”