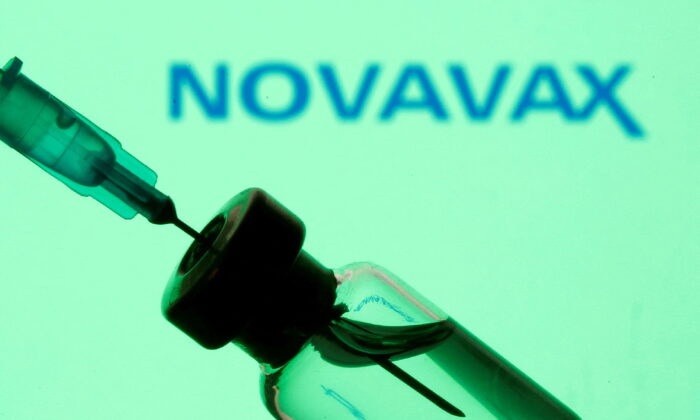 A vial and sryinge in front of a displayed Novavax logo on Jan.11, 2021. (Dado Ruvic/Illustration/Reuters)
Vaccines & Safety

FDA Decision on Novavax COVID-19 Shot May Be Delayed

The Food and Drug Administration’s (FDA) decision to authorize the Novavax COVID-19 vaccine for emergency use may be delayed due to the FDA reviewing changes to the company’s manufacturing process.

Novavax told The Epoch Times that the company updated the FDA on changes to its manufacturing process on June 3, days before the advisory committee was scheduled to review its vaccine’s safety and efficacy data.

The committee on June 7 voted 21–0 with one abstention, after seven hours of discussion, agreeing that the benefits of a 2-dose Novavax vaccine outweighed its risk for use in adults aged 18 and older.

“FDA will carefully review this and any additional information submitted by the firm as part of its ongoing assessment and prior to authorizing the vaccine for emergency use,” the FDA spokesperson Abby Capobianco told CNBC.

Though the FDA is not obligated to follow the committee’s recommendation for their authorization, it normally does.

Capobianco told CNBC that the FDA will take the committee’s recommendation into consideration when making its decision.

During the pandemic, the FDA approved the COVID-19 vaccines quickly after the committee gave their approval, however, authorization for Novavax’s vaccine may take longer.

The company was one of the original participants in the U.S. government’s race to develop a COVID-19 vaccine in 2020, receiving $1.8 billion from Operation Warp Speed. However, the small biotech company struggled to build a manufacturing base from scratch and its clinical data came much later than Pfizer or Moderna, which rolled out their shots within a year after the gene sequence was released.

The Novavax spokesperson said that since the company applied for emergency authorization for its double-dosed COVID-19 shots on Jan. 31, the company has continued to share new updates with FDA (pdf).

But according to a senior official at the FDA’s vaccine division, the application has been “incredibly complex” for FDA officials to review as it involves both clinical and manufacturing data, CNBC reported.

While the vaccine still awaits authorization in the United States, Novavax has started rolling out around the world. Its vaccines have been authorized in more than 40 countries, including Australia, Canada, and the European Union.

The Associated Press reported that once approved, the Novavax vaccine may be a vaccination option for military service members who did not get vaccinated out of concerns that cell lines descending from aborted fetuses were used in the production process of the Pfizer, Moderna, and J&J vaccines.

Novavax, however, told Religion News Service that “no human fetal-derived cell lines or tissue” were used in the development, manufacture, or production of its vaccine

Dr. Michael Nelson, professor of medicine at the University of Virginia School of Medicine, said that the Novavax vaccine is another tool for people who are not able to get the mRNA shots.

About 22 percent of Americans have not received a single dose of the COVID-19 shot, with 78 percent who have gotten at least one dose, as of June 7, according to the Centers for Disease Control and Prevention (CDC).