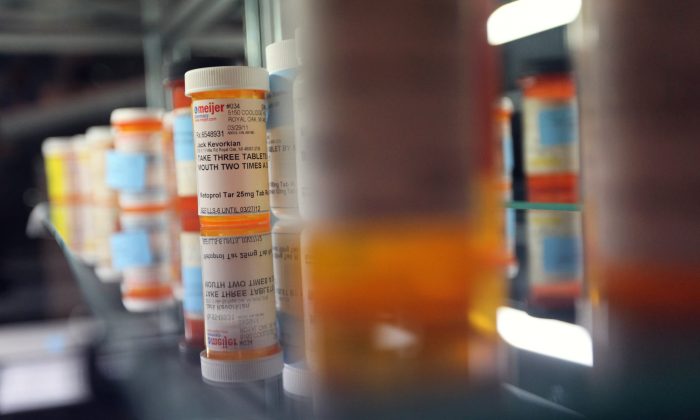 Pill bottles are displayed in this file photo. (Mario Tama/Getty Images)
US News

Blood pressure medication made by Lupin Pharmaceuticals Inc. is being recalled by the U.S. Food and Drug Administration (FDA) for possibly containing a cancer-causing impurity.

The voluntary recall includes the firm’s Irbesartan tablets and Hydrochlorothiazide tablets at the consumer level, according to the FDA.

The FDA, in a news release last week, said that a “probable human carcinogen” was discovered after results from testing.

“As part of Lupin’s ongoing assessment, analysis revealed that certain tested API batches (but not finished product batches) were above the specification limit for the impurity, N-nitrosoirbesartan,” said the agency.

Lupin hasn’t received any reports of illness that appear to be connected to the problem, said the FDA.

But the firm, operating “out of an abundance of caution,” is now recalling all batches of Irbesartan Tablets in 75 mg, 150 mg, and 300 mg strengths; and Irbesartan and Hydrochlorothiazide Tablets USP in 150 mg/12.5 mg and 300 mg/12.5mg strengths in the United States.

The tablets were packaged in 30- and 90-count bottles and were distributed nationwide to wholesalers, drug chains, mail-order pharmacies, and supermarkets, according to the FDA, which includes a list of lot numbers and distribution dates in its recall bulletin. The lot number is located on the side of the bottle.

Lupin Pharmaceuticals, a country based in India, has discontinued marketing of Irbesartan and Irbesartan and HCTZ tabs in January 2021, the FDA said. The medication is used to treat hypertension, or high blood pressure.

Adverse reactions or quality issues can be reported to the FDA’s MedWatch Adverse Event Reporting program online or by mail.

The FDA notice also noted that people who are taking the Irbesartan or Irbesartan and Hydrochlorothiazide tablets should continue to do so and contact their doctor, pharmacists, or provider about whether they should seek alternative treatment.

Several years ago, several Chinese pharmaceutical companies were warned by the FDA due to impurities that were discovered in other blood pressure medications, leading to widespread recalls.