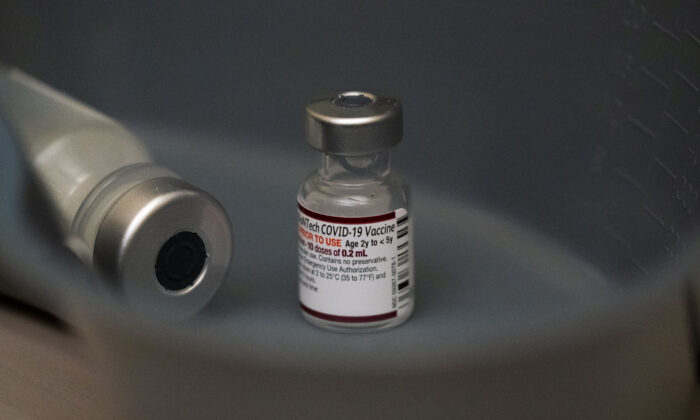 The U.S. Food and Drug Administration (FDA) granted emergency use authorization to Moderna and Pfizer for the updated boosters.

BA.5 is the subvariant currently dominant in the United States.

“The FDA has extensive experience with strain changes for annual influenza vaccines. We are confident in the evidence supporting these authorizations,” Dr. Peter Marks, director of the FDA’s Center for Biologics Evaluation and Research, said in a statement.

Dr. Robert Califf, the FDA’s commissioner, said that the agency was strongly encouraging people to get an updated booster if they’re eligible, “to provide better protection against currently circulating variants.”

The shots can be administered as little as two months after the second shot of a primary series, or after the most recent booster, according to the FDA. That’s down from five months. The updated Moderna shot is available to those 18 and older; Pfizer’s is available to those as young as 12. For those age groups, the booster with the old formulation is no longer available. However, the primary series will still use the old formulation.

Much of the data underpinning the requests for authorization were for a different formulation, a combined Wuhan–BA.1 formulation. BA.1 is another subvariant of the Omicron variant. BA.1 hasn’t been dominant in the United States for months.

A phase 2/phase 3 study for Moderna’s Wuhan–BA.1 bivalent vaccine showed that it triggered a stronger antibody response than the booster based solely on the original strain, the company has said. It also appeared to offer protection against the BA.4 and BA. 5 subvariants. Full results of the study have not been released.

Pfizer and its partner BioNTech also said that a phase 2/phase 3 study showed their Wuhan–BA.1 bivalent performed better than the original formulation, and had a “favorable safety profile.” The results of the study haven’t been released apart from a press release.

Moderna and Pfizer also included preclinical data for the shots containing the original strain and components of BA.4 and BA.5 in their applications. Preclinical means that no humans are involved in the testing.

The FDA’s advisory panel in June recommended vaccine makers modify their booster shots to include components of BA.5.

The panel wasn’t convened again before the Aug. 31 decision.

Dr. Vinay Prasad, an epidemiology professor at the University of California–San Francisco, was among the critics of the FDA’s authorizations, saying on Twitter that the lack of human trial data means that authorities were “flying blind.”