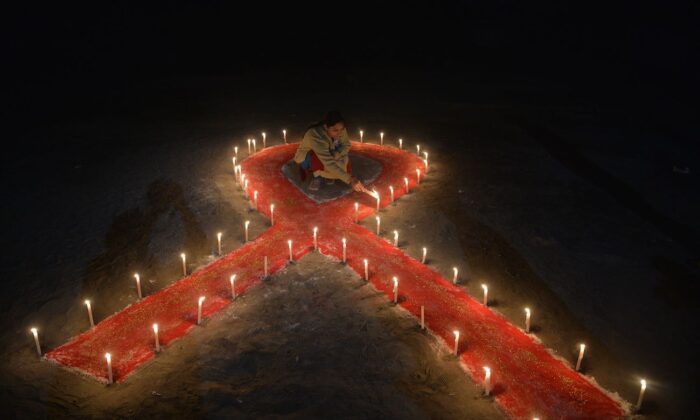 Candles form the shape of a ribbon as part of an awareness event on the occasion of World AIDS Day in Siliguri, India, on Dec. 1, 2018. (Diptendu Dutta/AFP via Getty Images)
US News

The U.S. Food and Drug Administration on Monday approved the first injectable medication to lower the risk of contracting HIV, or the human immunodeficiency virus.

The FDA-approved medication is an injectable form of GlaxoSmithKline Plc’s cabotegravir drug. The injection, called Apretude (cabotegravir extended-release injectable suspension), is given every two months as a preventative treatment, or pre-exposure prophylaxis (PrEP), to reduce the risk of sexually-acquired HIV.

After an initial injection, the drug is administered one month later, and then every two months thereafter.

The FDA’s approval means the injection can be administered to at-risk adults and adolescents weighing at least 35 kilograms (77 pounds).

The FDA said that patients can start their treatment with Apretude or with the oral cabotegravir for four weeks to see how well they tolerate the drug.

The injection includes a boxed warning—the FDA’s strictest warning—to not use the drug unless a negative HIV test is confirmed.

“It must only be prescribed to individuals confirmed to be HIV-negative immediately prior to starting the drug and before each injection to reduce the risk of developing drug resistance,” the FDA emphasized in its announcement.

“Drug-resistant HIV variants have been identified in people with undiagnosed HIV when they use Apretude for HIV [PrEP],” the agency continued. “Individuals who become infected with HIV while receiving Apretude for PrEP must transition to a complete HIV treatment regimen.”