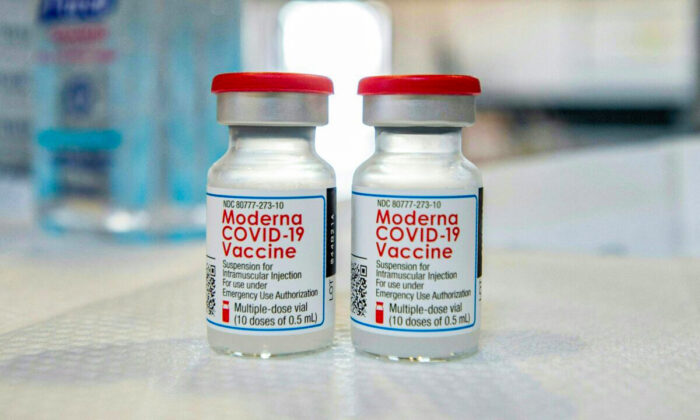 Advisers to the Food and Drug Administration (FDA) on June 14 recommended the agency grant emergency authorization to Moderna’s COVID-19 vaccine for children aged 6 to 17.

The advisory panel was asked whether they believe the benefits of the vaccine outweigh the risks, and unanimously voted yes following an eight-hour virtual meeting.

The FDA is not mandated to accept the panel’s recommendations, but typically does.

The only COVID-19 vaccine currently available to youth is Pfizer’s jab.

According to data from several Moderna-run clinical trials, the company’s vaccine was 93 percent effective for children aged 12 to 17, based on data through May 8, 2021. For those 6 through 11, the vaccine was 77 percent effective, based on data through Nov. 10, 2021. Both time periods preceded the emergence of the Omicron variant and Omicron subvariants.

The lack of later data stemmed from Pfizer’s COVID-19 vaccine becoming available in 2021 to children as young as 5. Most participants in Moderna’s trials who received placebos received the Pfizer vaccine, effectively wiping out the placebo arm.

Still, panel members said that based on data from older populations who have received Moderna’s vaccine, the shot will likely protect against severe illness despite providing little to no shielding against infection.

“We have to make decisions based on the best data we have, which is always going to be old data in an outbreak that’s constantly moving,” Dr. Eric Rubin, a panel member, said. The vaccine “probably won’t do very much in protecting [children] against the current strain that’s circulating, and very likely won’t do a great job against the next strain that’s circulating. However, I think that the ability to protect against severe disease is quite compelling.”

The safety data from the trials was based on some 5,860 participants. The immunogenicity data was based on 727 volunteers.

The recommendation was for a two-dose primary series, with the doses spaced one month apart.

All older age groups in the United States have been told to get a Moderna booster if they have gotten a primary series because the vaccine has performed poorly, especially against infection, since the emergence of the Omicron variant. Child Pfizer recipients as young as 12 have also been told to get a booster.

Panel members signaled that they see a booster coming in the future for Moderna’s shot, with regards to children who may be able to get it soon.

“The question is, will two doses of this vaccine offer adequate protection against Omicron subvariants? And I think the answer is, certainly regarding mild illness, no. And I think regarding severe illness, yes—as long as there’s a third dose,” Dr. Paul Offit, another panel member, said.

Dr. Amanda Cohn, a panel member who works for the Centers for Disease Control and Prevention (CDC), said the public health agency’s messaging now, in light of the waning vaccine effectiveness, is “if you haven’t gotten a dose in the last five months, you need to get a dose.”

But it’s important to, while promoting boosters, try to get people vaccinated who have not been, Cohn said.

The booster may be the one already in use in adults or it could be a newer one based on an updated formulation, according to Dr. Rituparna Das, a vice president of clinical development at Moderna.

Dr. James Hildreth, another panel member, said he was voting yes but wanted the public to be aware that the “true risk” from COVID-19 in children “is relatively small.

“I think in discussing this with the public, let’s be honest about the true risk with this,” give parents the option but “certainly make it optional, because clearly some kids get this and do just fine.”

According to federal data, 5- to 17-year-old children have a hospitalization rate of about 7 per million cases during the pandemic.

Several panel members said the rate of post-vaccination heart inflammation, which is pegged higher following receipt of Moderna’s vaccine versus Pfizer’s shot, was an issue, but heard during the meeting about a CDC study that estimated the risk of the condition is actually higher following COVID-19 than vaccination.

Other studies have reached different conclusions, but those weren’t raised.

Detecting some adverse events requires a larger population than the trial had, or a longer follow-up period, according to Zhang.

“Those unknown risks will have to be defined once this vaccine goes into more, larger population,” she said.