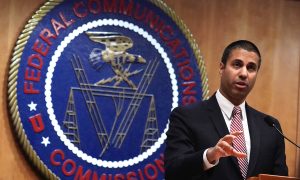 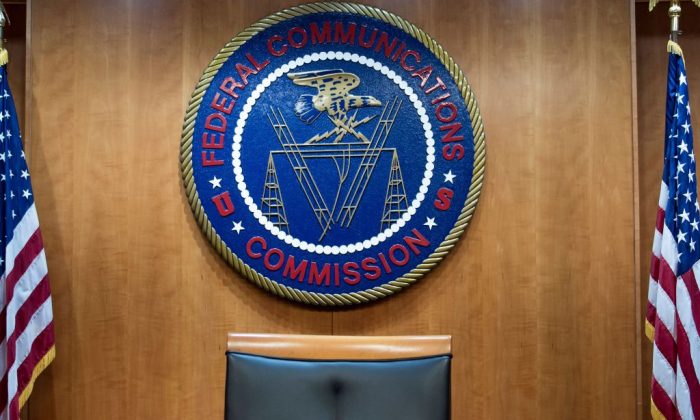 The U.S. Federal Communications Commission has announced a probe into CenturyLink after a nationwide outage that has been disrupting 911 lines, on Dec. 27, 2018. (Brendan Smialowski/AFP/Getty Images)
Politics

FCC Commissioners Brendan Carr and Nathan Simington in separate statements responded to letters from two Democratic members on the House Energy and Commerce Committee that were sent to 12 cable, satellite, and streaming companies.

“To the House Democrats that used their official letterhead to launch this inquiry, I would say this: Your demand to know the ‘moral principles’ that guide a private entity’s decision about what news to carry cannot be reconciled with bedrock principles of free speech and journalistic freedom,” Carr said (pdf).

In their letters, the Democratic House members urged the companies to take steps they asserted would combat the spread of “misinformation.”

Reps. Jerry McNerney (D-Calif.) and Anna G. Eshoo (D-Calif.) claim that right-leaning Fox, Newsmax, and One America News had spread “misinformation” after the November 2020 elections and about COVID-19. Their letters also demanded answers to why carriers were carrying these television outlets.

The carriers were asked questions such as what moral or ethical principles they apply in deciding which channels to carry, how many subscribers tuned into the networks in the weeks preceding the presidential election, and whether they’ve taken adverse actions against any channel in the wake of the election or the Jan. 6 storming of the U.S. Capitol.

Carr said that the two House Democrats had “selectively targeted” several news media outlets for their coverage of political events, saying that such actions send a clear and troubling message of “these regulated entities will pay a price if the targeted newsrooms do not conform to Democrats’ preferred political narratives.”

“This is a chilling transgression of the free speech rights that every media outlet in this country enjoys,” he said.

The commissioner reminded Americans that discourse on matters of public interest should be “robust, uninhibited, and wide open.”

“More speech is better than less. Yet the concerted effort by Democrats to drive political dissent from the public square represents a marked departure from these First Amendment norms. A newsroom’s decision about what stories to cover and how to frame them should be beyond the reach of any government official, not targeted by them,” he said.

Simington echoed Carr’s concerns, characterizing the two House Democrats’ conduct as “worrying.” He said the lawmakers were applying “overbroad and vague label of ‘misinformation’ to any media reportage that calls into question their preferred political narratives, and have sought to intimidate into silence those who would distribute on their platforms disfavored points of view.”

“This is particularly concerning because the House Energy and Commerce Committee supervises the Communications Act, and their statement could be read to imply that action will be taken under the Communications Act should the recipients not agree in advance to chill their speech,” he said (pdf).

“I trust the American people to make up their own minds regarding to whom they choose to listen.”

Acting FCC Chairwoman Jessica Rosenworcel and her staff didn’t immediately respond to a request from The Epoch Times for comment on the letters.

In separate statements to The Epoch Times, spokespeople from Fox News and Newsmax decried the lawmakers’ conduct, saying that their actions set “a terrible precedent.”

Last month, left-leaning CNN made a similar move in attempting to pressure cable carriers into removing competitors such as Newsmax. Newsmax responded, saying that CNN was trying to eliminate Newsmax as a competitor, while noting that the liberal cable channel has a history of misreporting and peddling “conspiracy theories” about Christopher Steele’s dossier and Russian collusion.

McNerney’s and Eshoo’s offices didn’t immediately respond to a request to comment from The Epoch Times.