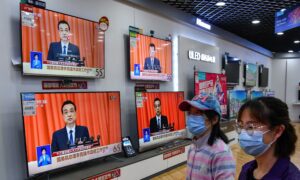 Americans have come to understand the national security threat posed by China-based telecom companies, but they might be surprised to learn that equipment from the telecom firms continues to be used in U.S. networks, according to Brendan Carr, Federal Communication Commission (FCC) commissioner.

The FCC in 2020 banned carriers in the United States from using an $8.3 billion federal fund to purchase equipment from China-based telecom companies Huawei and ZTE after deeming them to be national security threats. However, carriers are allowed to buy and use the exact same equipment as long as they use private funds.

“To me, that is a glaring loophole that makes no sense,” Carr said in a recent interview with The Epoch Times’ “American Thought Leaders” program.

Under Chinese laws, “these companies basically have to fork over any information or data that the communist party might be seeking.”

Carr said the FCC has evidence of an unnamed carrier controlled by the Chinese Communist Party (CCP) taking internet traffic originating in California and destined for Washington, D.C., and rerouting the traffic through Guangzhou, China.

“You don’t need to be a network engineer to understand that route is not the most efficient way to route traffic if what you cared about was simply delivering the data in an efficient manner,” he said.

China Telecom, a state-owned company, has previously attracted scrutiny for diverting overseas internet traffic through China in several instances, raising concerns about whether the data was accessed by the communist regime.

China-based companies can’t be trusted to comply with laws in the West, Carr said.

“There’s no world in which you can have a company like Huawei that engages in the race-based surveillance and other practices in China, and yet create a wall in which they’re going to respect Western values when they do business in America,” he said.

Just like how the concept of “one country, two systems” is failing in Hong Kong, the idea that China-based telecom companies can engage with the United States under the banner of “one company, two systems” is going to be equally untenable, Carr said.

“One country, two systems” is the framework under which China’s communist regime had promised to rule Hong Kong when sovereignty was transferred from Britain in 1997. Beijing had pledged to allow the city autonomy and freedoms not enjoyed in the mainland. But over the years, especially in the past 12 months, the regime has moved to drastically curtail freedoms and democracy in the city, effectively reneging on this promise.

The FCC is engaging in a process called “rip and replace” in which they seek to replace network gear from Huawei and ZTE already installed in the United States. Congress approved $1.9 billion to fund the removal of such equipment in December 2020.

In 2019, the FCC banned China Mobile, one of the largest cellular carriers in the world, from the U.S. market. It has also moved toward barring three other China-based telecom carriers due to national security concerns.

Carr is also proposing that the FCC demand companies that import devices into the country prove there isn’t slave labor involved in those products. The CCP has forced Uyghurs detained in China’s Xinjiang region to work in factories and fields as part of an expansion campaign of repression.