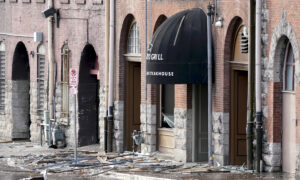 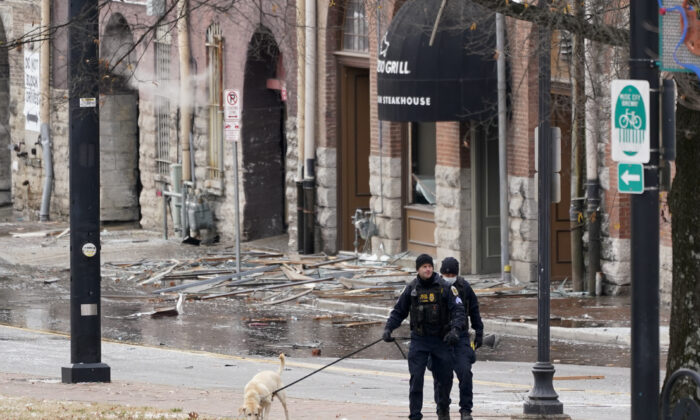 A K-9 team works in the area of an explosion in downtown Nashville, Tenn., on Dec. 25, 2020. (Mark Humphrey/AP Photo)
Crime and Incidents

FBI Special Agent Matt Foster, who’s leading the investigation into the Nashville detonation on Friday, vowed to track down those responsible.

“This is our city, too, we live here, we work here. We’re putting everything we have into finding who was responsible for what’s happened here today,” Foster told press Friday afternoon.

“We will find out what happened here,” he added.

On Saturday morning, Nashville had reported no fatalities related to the explosion, but three were hospitalized and one police officer experienced temporary hearing loss, according to The Tennessean.

Law enforcement said “tissue” found near the site is still under examination. It is yet unknown if anyone was in the RV when it detonated.

According to The Tennessean, authorities said that police responding to calls of shots fired discovered a suspicious RV parked outside of an AT&T building before 6 a.m. They found no evidence of a shooting, but officers and witnesses heard a broadcast coming from the RV requesting evacuation due to an imminent bomb detonation. The broadcast gave a 15-minute countdown.

Six officers knocked on each and every door in the area and rerouted a man walking his dog.

The explosion happened at 6:30 a.m. while the bomb squad was still on the way.

Authorities said the explosion was deliberate and intentional.