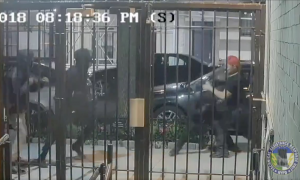 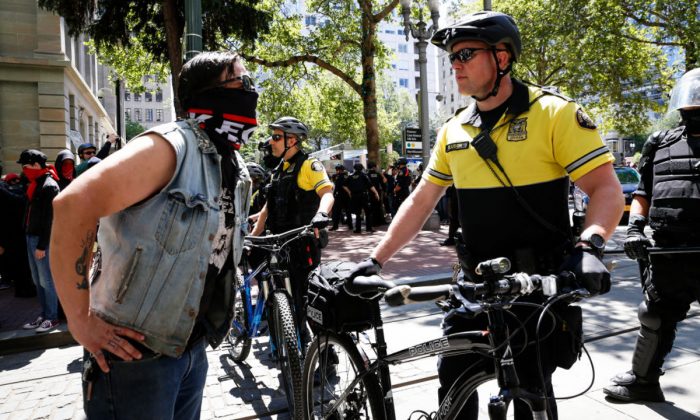 An unidentified protester clashes with a police officer during a demonstration between the left and right at Pioneer Courthouse Square, in Portland on June 29, 2019. These clashes led an ex-marine to stand outside Mayor's office on July 20 and warn about "slaughtering" Antifa that led FBI to confiscate his guns. (Moriah Ratner/Getty Images)
US News

FBI’s Joint Terrorism Task used Oregon’s new red flag law to temporarily confiscate an ex-marine’s guns and had him committed to a veteran’s hospital after he stood outside the Portland mayor’s home on July 20 warning over a loudspeaker he has a plan to wipe out Antifa.

The step was taken to prevent him from joining a right-wing rally and counter-protests planned for Aug. 17 in downtown Portland. Authorities were worried that the clashes would turn violent. The ex-marine returned home from the hospital on Tuesday.

Shane Kohfield, 32 was wearing body armor and a “Make America Great Again” baseball cap. He had a knife secured on one shoulder and his weapon permit pinned on the other shoulder when he stood outside the Mayor’s home, reported Oregonian.

He was present outside the Mayor’s home when the right-wing protestors from a group called Portland’s Liberation had gathered there to condemn the city’s handling of the June 29 attacks between the right-wing and the anti-fascist, or the Antifa. The streets brawls had injured several people, according to an earlier report by Oregonian.

“If antifa gets to the point where they start killing us, I’m going to kill them next,” said Kohfield. “I’d slaughter them and I have a detailed plan on how I would wipe out antifa.”

This threat led the FBI to use Oregon’s new Red Flag Law, also called the Extreme Risk Protection Order to temporarily seize his cache of firearms.

The new law allows “courts to take weapons away from people who are at risk as a danger to themselves or others,” said Oregon Attorney General Ellen Rosenblum in a statement on Oregon Department of Justice’s website.

FBI moved Kohfield to a veteran’s hospital in Portland where he spent the next 20 days. Oregonian says this prevented him from participating in the right-wing rally on Aug. 17 that had attracted counter-protests.

Kohfield who had served two tours in Iraq was not charged with any crime but was prevented from attending the rally as he had earlier threated to “slaughter” Antifa.

“The first step is for a concerned family member, household member, or law enforcement officer to ask the court for an Extreme Risk Protection Order (ERPO), which will remove a weapon, or a concealed handgun license, from an individual who is at risk for suicide or is a danger to others. An Order also prevents the person from buying additional guns for a one year period,” said the Department of Justice.

Kohfield whose medical records say that he suffers from bipolar and post-traumatic stress disorder, upon his return told Oregonian that he had no intention to hurt anyone. He said he understands why the police dealt with him the way they did.

“I looked unhinged. I looked dangerous and have the training to be dangerous,” he said.

He mentioned that by warning Antifa on the loudspeaker he was trying to keep others away from violence.

The FBI was already monitoring Kohfield because in March he had written a five-page letter to Texas Rep. Dan Crenshaw, a first-term Republican congressman, and former Navy Seal, accusing the Portland’s mayor and police of allowing the Antifa attacks against conservatives.

He had mentioned that the masked Antifa protestors had assaulted him during a November rally and in his letter, he wrote to Crenshaw requesting Congress declare Antifa a terrorist organization.

In a Facebook post, Kohfield, mentions that he never told police that he wanted to harm Antifa.

“The only thing I said was I have no desire to harm anyone, I just don’t want people I love, killing people that I love,” he wrote on Facebook on Sunday, along with a copy of his medical records.