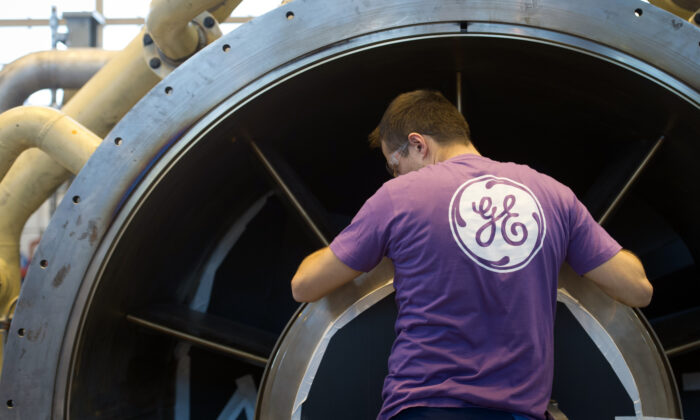 An employee of U.S. multinational General Electric (GE) works on a gas turbine at the GE plant in Belfort, eastern France, on Oct. 27, 2015. (Sebastien Bozon/Getty Images)
Infiltrating the West

Chinese Agent Downloaded 200 Family Photos of GE Engineer in Bid to Recruit Them to Steal US Tech, FBI Agent Testifies

The head of the FBI counterintelligence unit in southern Ohio testified in the espionage trial of Xu Yanjun, a Chinese agent accused of recruiting spies to steal tech from U.S. aviation companies, reported media WCPO.

FBI supervisory special agent Bradley Hull told a U.S. District Court in Cincinnati on Monday that Chinese agents had downloaded 200 family photos of an engineer at General Electric (GE) as part of their bid to coerce him to become a spy.

“I think it shows they took the time to learn about their target,” said Hull, who testified for three days, according to WCPO. “The presence of over 200 images brought to a meeting in a foreign country could be used as a manner of coercion … he still has family in China.”

The federal espionage trial of Xu, who is charged with recruiting spies to steal technology from U.S. aviation and aerospace firms, began on Oct. 18. Xu is a deputy division director of China’s Ministry of State Security (MSS), the intelligence, security, and secret police agency of the communist regime. He’s the first MSS operative extradited to the United States.

Hull said the Chinese regime aimed to steal polymeric composites technology that GE Aviation developed after decades of research and millionaire investments. This technology is exclusive to the company and serves to manufacture larger, lighter, and energy-saving commercial planes that are highly competitive.

Within the “Made in China 2025” economic plan, the Chinese Communist Party (CCP) aims to develop key industries—including “aircraft and aircraft components”—in an attempt to turn the country into a high-tech manufacturing powerhouse. Some experts say the strategy consists of stealing trade secrets from other countries (pdf).

According to Xu’s indictment, he had been contacting experts from aviation companies in the United States and other countries, including GE Aviation, since December 2013. He then started recruiting people to travel to China, all expenses paid, usually masquerading as academic trips.

In 2017 GE learned one of its engineers had flown to China, to give a presentation at a university, taking GE documents with him on his laptop, according to WCPO. The company then started an investigation and informed the FBI.

“GE looks for employees within its companies with red flags,” Hull said.

The engineer targeted by Xu started cooperating with the FBI, after his home was searched on Nov. 1, 2017. Belgian police arrested Xu on April 1, 2018, at a meeting set up by the GE engineer, and confiscated several devices from him and his companion.

Hull further said Xu’s cell phone was useful to the investigation, as it helped understand how Chinese spies operate and identify other agents working with Xu.

“People in intelligence like us—we focus on aviation,” read a message sent from Xu to a co-worker in 2016, Hull told the court while reading a transcript. “The leadership asks you to get the materials of the U.S.—the U.S. F-22 fighter aircraft. You can’t get it by sitting at home.”

Correspondence between Xu and his colleagues was encoded to avoid directly mentioning terms like “de-icing technology” and “U.S. aerial refueling aircraft”, stated Hull.

Xu has been a Chinese Communist Party agent since 2003. During the trial, prosecutors exhibited an image of Xu’s CCP membership card that was unknown to the FBI, according to Hull.