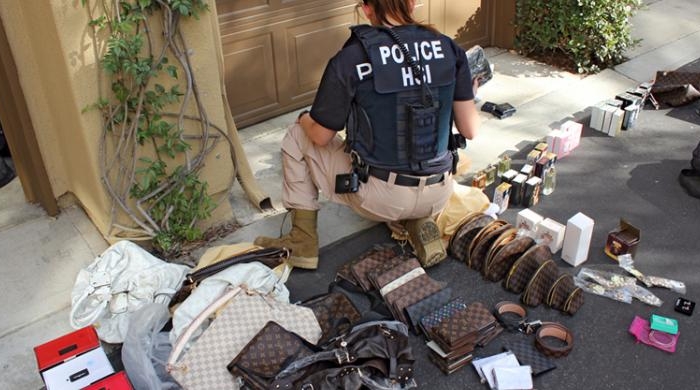 The Justice Department announced a new $3.2 million initiative that will team up state and local law enforcement agencies to combat both the sale of counterfeit goods and online piracy. The funds will be given to 10 different jurisdictions, where officers will be trained on how to prevent and prosecute the violation of intellectual property rights and copyright infringement, as well as act as a conduit between brand owners and online marketplaces where the contraband is sold.

“The digital age has revolutionized how we share information, store data, make purchases, and develop products, requiring law enforcement to strengthen our defenses against cybercrime–one of my top priorities as Attorney General,” Attorney General Loretta Lynch said in a statement on Oct. 2.

The funds will be distributed through the department’s Intellectual Property Enforcement Program, which has doled out nearly $15 million to police departments around the country since it was established in 2009. In total, departments that have received funding have arrested more than 3,500 individuals and seized $260 million in counterfeit property.

The rise of online marketplaces like eBay and Alibaba have been accompanied by the inundation of the sale of counterfeit goods. According to the Organization for Economic Cooperation and Development (OECD), the value of counterfeit and pirated products worldwide grew from barely over $100 billion in 2001 to $250 billion in 2007.

U.S. customs agents made 23,140 seizures of counterfeit products in 2014 worth $1.2 billion at retail price, according to the Department of Homeland Security. The most common category of items was watches and jewelry, followed by handbags and wallets, and then consumer electronics, with the majority of it originating from a single country: China.

Part of the ease with which counterfeit goods are bought and sold on e-commerce websites is that existing regulations don’t burden the businesses with the obligation to pre-emptively remove listings of counterfeit goods, just that they do so when they’re notified of the violation.

In 2008, Tiffany’s complained about the frequent sale of counterfeit jewelry in its name on eBay, and requested that any listing of five or more Tiffany products should be presumed counterfeit until proven otherwise; the request was denied.

Apart from control of the online sector, much of the future of the counterfeit economy will depend on enforcement on the ground in China. Last year, Alibaba touted progress not only in the crackdown on counterfeit products on its websites, but also in cooperating with law enforcement to root out the problem at the source.

In a report from December, the company claimed that it invested over $160 million on counterfeit and consumer protection, and that “only 3.5 transactions in every 10,000 transactions received customer complaints, 22 percent decline from last year.” It also boasted that cooperative efforts with police led to the arrest of over 200 counterfeiters in Shanghai and Fujian Province.

However, not everyone is satisfied with Alibaba’s efforts. In March, Gucci, Yves Saint Laurent, and other brands owned by Kering-SA filed a lawsuit against the company, alleging that platforms “knowingly encourage, assist, and profit from the sale of counterfeits,” including granting “gold supplier” and “assessed supplier” status to companies that engage in the wholesale manufacturing of fake Gucci products.

The lawsuit also alleges that Alibaba assists users to search for counterfeit products by auto-completing searches of “replica” with “wristwatches,” and allows sellers who are openly counterfeiters to do business on its websites.

Kering-SA filed a previous lawsuit against Alibaba with similar allegations in July 2014, two weeks before the company’s IPO efforts began in the United States. The lawsuit was withdrawn after two weeks when the two companies said they would work together to reduce counterfeiting.