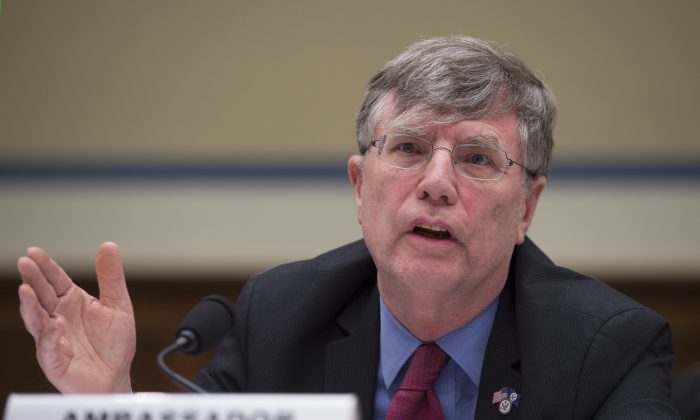 Undersecretary of State for Management Patrick Kennedy testifies on Capitol Hill in Washington, on Sept. 8, 2016 . (AP Photo/Molly Riley)
US

WASHINGTON—A now-retired FBI agent and a State Department official involved in a discussion over the classification of information in one of former Secretary of State Hillary Clinton’s emails said Tuesday they had discussed mutual agency requests but had not linked the two as a bargain, as another FBI employee had reported.

The two men’s accounts of a 2015 conversation were not identical and will likely not calm the furor over allegations of the State Department trying to arrange a “quid pro quo” to reduce the classification of an email from Clinton’s private server in exchange for more FBI positions at the U.S. Embassy in Iraq. The issue was thrust into the presidential campaign Monday when the FBI published documents containing the allegation, which has been seized upon by Republican lawmakers and GOP presidential nominee Donald Trump.

In a statement released by the State Department, Under Secretary for Management Patrick Kennedy said he had called the agent, who was not named in the FBI documents but was identified by The Washington Post as Brian McCauley, “to better understand a proposal the FBI had made to upgrade one of former Secretary Clinton’s emails prior to its public release.”

Kennedy said he and other State Department officials wanted an explanation of the upgrade, which they believed was unnecessary.

“The FBI official I spoke to raised the topic of FBI Iraq slots as an entirely separate matter,” Kennedy said. “The two matters were not linked. There was no quid pro quo, nor was there any bargaining. At no point in our conversation was I under the impression we were bargaining. In the end, State upgraded the email at the FBI’s request and in addition, no increase in FBI Iraq slots resulted from this conversation.”

Kennedy was a close aide to Clinton during her tenure as the nation’s top diplomat between 2009 and early 2013. He had served in his position since November 2007, under President George W. Bush. In his statement, he denied any political motive in making the call.

In an interview with The Washington Post, McCauley, the former FBI international operations official, recalled a 2015 phone call in which he said the two men each raised something that they wanted.

“He said: ‘Brian. Pat Kennedy. I need a favor,'” McCauley told the Post. “I said: ‘Good, I need a favor. I need our people back in Baghdad.”

According to McCauley’s account, Kennedy replied: “There’s an email. I don’t believe it has to be classified.”

McCauley acknowledged to the Post that he had agreed to do a favor for Kennedy, but he said that after consulting with another FBI official about the email in question, he told Kennedy that he was unable to help him. He said there was no “collusion” between the two men and nothing improper occurred.

McCauley did not immediately respond to a phone message left in the mailbox of a company, Brainwave Science, that named him to its advisory board earlier this year.

The use of the phrase “quid pro quo” actually arises in a separate interview with a different FBI official from the bureau’s records management division.

That official, whose name is redacted in the documents, relayed to the FBI a conversation between Kennedy and a colleague in the international operations division — presumably McCauley — that was characterized as a “quid pro quo” agreement to change the email’s classification status in exchange for allowing the FBI to place more agents in countries where they are currently forbidden, according to a summary of the interview.

The email in question described reports in November 2012 that Libyan police were arresting suspects in the attack on U.S. facilities in Benghazi, Libya. It had been forwarded to Clinton’s private email address by Jake Sullivan, one of her top aides and the department’s director of policy planning, who was using his government email account.

The Associated Press reported the existence of the secret Benghazi-related email in May 2015, though the classified content of the document has never been made public. At the time, administration officials acknowledged interagency disagreements about whether certain information in the emails was classified.

Although the State Department and FBI denied there had been a quid pro quo, Republicans seized on the report as collusion within the Obama administration to protect Clinton, now the Democratic presidential nominee.

Clinton spokesman Brian Fallon said the campaign had never been part of any such discussion about email classifications.

House Republicans said Monday the reports of behind-the scenes maneuvering with the FBI were “extremely disturbing.”

“Those who receive classified intelligence should not barter in it — that is reckless behavior with our nation’s secrets,” House Oversight and Government Reform Committee Chairman Jason Chaffetz, R-Utah, and House Intelligence Committee Chairman Devin Nunes, R-Calif., said in a joint statement.

The ambiguities laid bare in the FBI documents—summaries of interviews—are fairly standard for criminal investigations, where different witnesses offer different accounts of the same interaction and agents and prosecutors behind closed doors are left to try to determine the truth.

The summaries being released in this case reflect what witnesses told agents without presenting an agreed upon or easily reconcilable narrative. In promising extraordinary transparency in the Clinton email investigation, FBI Director James Comey authorized the release of interview summaries and agents’ notes that are almost never seen by the public—particularly in cases that close without charges.