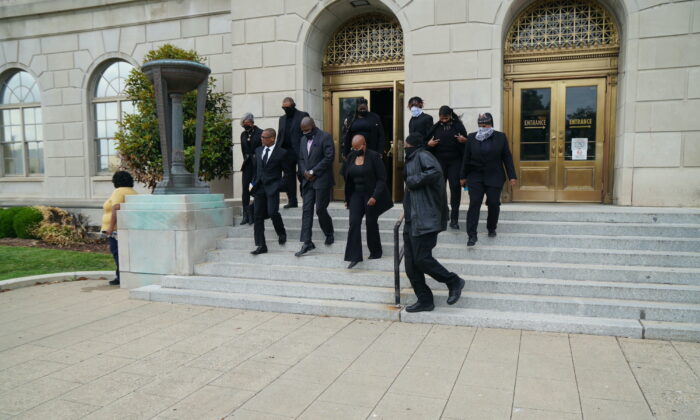 John Johnson, the militia leader accused of pointing his rifle at law enforcement, leaves court in Louisville, Ky., on May 23, 2022. (Ken Silva/The Epoch Times)
US

LOUISVILLE, Ky.–During opening arguments on May 24 in the trial of all-black militia leader John Johnson, prosecutor Joseph Ansari said five law enforcement officers feared for their lives when Johnson pointed his AR-15 rifle at them on Sept. 4, 2020, in Louisville.

According to Ansari, the law enforcers—who included members of the Louisville Metro Police Department, the FBI, and Secret Service—were so fearful that they didn’t engage Johnson or arrest him on the spot. Nor did they arrest him when he made a speech shortly after, when he returned to his hotel that night, or when he left town after the weekend’s protest activities.

Instead, the FBI launched an investigation into the leader of the all-black militia Not [Expletive] Around Coalition (NFAC), culminating three months later—Dec. 3, 2020—when law enforcement knocked down the door of Johnson’s Cincinnati townhouse with an armored vehicle to execute a search warrant, Ansari said.

The prosecutor told jurors that law enforcers took the aforementioned steps to ensure the safety of all parties involved.

“There were five officers, four with handguns and one with a long rifle [when Johnson pointed his AR-15 at them],” Ansari said, explaining that Johnson was accompanied by heavily armed members of his militia, and that the officers did not want to start a gun battle.

When it was his turn to address the jury, defense attorney Donald Meier said the prosecution’s facts show that his client did not have intent to harm or intimidate law enforcement.

Meier started by playing surveillance footage showing Johnson allegedly pointing his firearm at the five law enforcement officers, who were standing on the 60-foot-tall grand jury building in downtown Louisville.

Johnson is seen turning on the tactical flashlight attached to his AR-15, and then using the rifle to scan the rooftop for several seconds before returning it to his side. The footage does not show the officers, though Meier didn’t dispute that his client was pointing his rifle in their direction.

“You can see [Johnson] fooling around with his flashlight and [he] points it up once the light is on. There’s no visible reaction—he sees who it is [on the roof], and that’s the end of it,” Meier said.

Meier told jurors they must prioritize “facts over feelings”—including the feelings of the law enforcement officers—when considering government’s allegations against his client.

According to Meier, the facts reveal that Johnson didn’t have his finger on the trigger, nor was he looking through his scope—suggesting that he was simply scanning the rooftop with the flashlight.

Moreover, a city official who had been observing Johnson’s actions over city surveillance cameras met with Johnson and his militia shortly thereafter, greeting them with hugs.

“What do the officers do? They realized he pointed a gun at them, but don’t mobilize officers or radio that he’s in the park with the same weapon,” Meier said. “A couple stepped back from the rooftop [after Johnson pointed his weapons at them] but then they continued to look from the same area.”

The defense attorney also said his client was invited to speak in Louisville in October 2020 by Louisville Metro Police veteran Yvette Gentry, who was to be sworn in as interim police chief at the time.

Why would Gentry invite Johnson to speak if he indeed is a “wannabe cop killer?” Meier asked the jury.

Meier added that Johnson was cooperative during the December 2020 voluntary interview with the FBI, and that he didn’t even know what crime he was being accused of until more than halfway through the interview.

The defense attorney finished his opening statement by noting his client’s beliefs about the U.S. justice system being unjust to racial minorities.

“I, for one, hope he’s wrong about his beliefs,” Meier said.

After the opening arguments, the prosecution called its first witness, Louisville Metro Police Department officer Aubrey Gregory, who was in charge of local police efforts to help coordinate protests throughout the summer of 2020.

Gregory was still testifying as of the publication of this article. The trial is scheduled to last throughout this week, with the five officers set to testify. Johnson will also take the stand, his attorney said.

Johnson faces up to 20 years imprisonment if found guilty of aiming his rifle at law enforcement officers with the intent to assault or intimidate them.