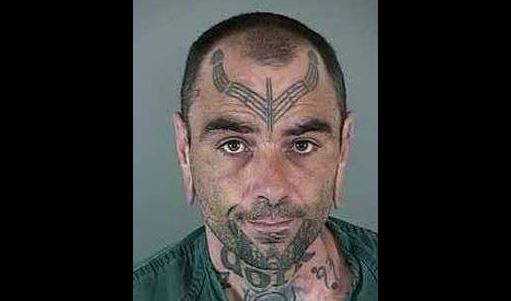 The FBI is asking for the public’s help in finding a fugitive with a distinct tattoo on his neck.

Shawn Frederick Weatherhead has the word “dork” plastered across his neck, along with several other tattoos.

The law enforcement agency said that Weatherhead has called the FBI 1,000 times since December 2015.

In several calls, he made threats to kill people, reported KPTV.

Weatherhead is described by agents as a transient with ties to the areas of Springfield and Eugene in Oregon; Eureka, California; and Reno, Nevada.

The calls were made from phones in Oregon, California, and Nevada to the agency’s public access line, which is based in West Virginia, as well as offices around the country.

A federal judge in California issued an arrest warrant for Weatherhead on charges of interstate communication of a threat to injure the person of another.

Weatherhead is described as a white man with hazel eyes and brown hair, standing 5 feet 6 inches, and weighing 140 pounds.

Along with the “dork” tattoo, he has other tattoos, including wings on his forehead and some on his arm, wrist, hand, right leg, and back.

Weatherhead was originally born in Nevada and has worked as a tattoo artist. The FBI said he’s known to carry a switchblade knife and is believed to be a user of illegal drugs.

Anyone with information should contact the local FBI office or the nearest American Embassy or consulate.