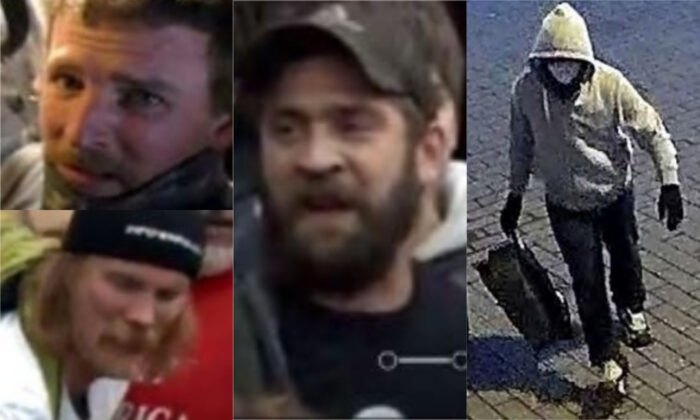 Suspects in crimes committed in Washington on Jan. 6, 2021. (FBI)
Crime and Incidents

FBI Releases Photos of Suspects in Beating of Officer, Planting of Pipe Bombs on Jan. 6

The FBI on Jan. 17 released new pictures of men they say were involved in the beating of a police officer on Jan. 6 and a suspect that agents believe planted pipe bombs at the Republican National Committee and Democratic National Committee headquarters the same day.

The agency published photographs of seven males who are accused of beating Metropolitan Police officer Mike Fanone during the tumult in and near the Capitol building in Washington.

All seven appear to be white males; most have facial hair. Their faces are clearly seen except for one man, whose face is obscured partially by a white mask.

Another set of pictures shows a single person wheeling a suitcase. That person, the FBI said, is suspected of planting pipe bombs at both committee headquarters in Washington.

Dozens of people have been arrested and charged in connection with the Capitol storming.

Protesters stormed the Capitol on Jan. 6 to interrupt a joint session of Congress. Members of Congress were counting electoral votes as the final step in the 2020 election process. Dozens of protesters illegally entered the Capitol and some wrought damage to the interior. Others assaulted officers both inside and outside the building.

Fanone later recounted how rioters yanked clothing from him and tried to grab his gun.

“I remember guys chanting, like, ‘Kill him with his own gun.’ I was tased about a half-dozen times on the back of my neck. That sucked,” he told WJLA. “I thought about killing people.”

The D.C. police department said Fanone suffered a mild heart attack when he was “repeatedly beaten and tased by his attackers” on Jan. 6.