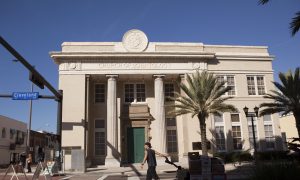 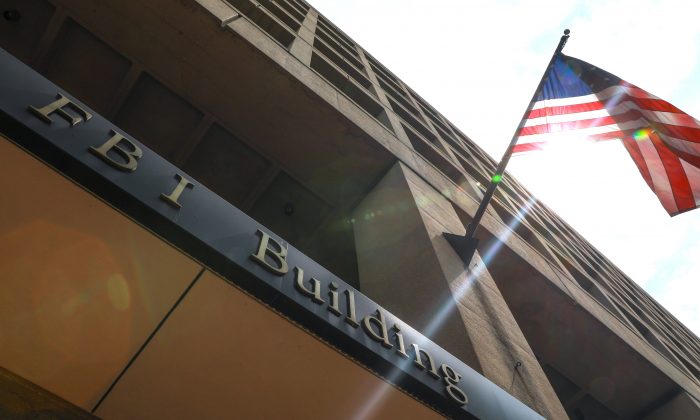 The Federal Bureau of Investigation Headquarters in Washington on July 11, 2018. (Samira Bouaou/The Epoch Times)
US News

The FBI released documents on Friday detailing a probe into the “Finders,” a secretive group that was allegedly connected to the U.S. government.

Allegations concerning child abuse committed by the group were brought to the attention of FBI agents after tips were relayed to the Department of Justice from people including U.S. Congressman Charlie Rose, according to a declassified document dated Oct. 27, 1993.

FBI agents searched for information about the group and found a reference to it in an FBI file concerning an arrest of two men in Tallahassee, Florida in 1987. Police officers there found the men with six children who were playing in a park while unkept and neglected.

“The two subjects with the children, could not initially provide sufficient information as to their legal custody of the children and were uncooperative regarding their identity and the children’s identity,” the file stated.

Information developed during the arrests, including the children disclosing they were from the Washington area, prompted Tallahassee officers to contact its local Customs Office, which relayed the information to the Metropolitan Police Department in Washington and provided details about a person whose name was redacted and their association with a group known as “Finders,” based in the nation’s capital. The Metropolitan Police Department had already received information from a confidential source that a group known as the “Finders” were conducting “brainwashing techniques at [redacted].”

“The source reported children were used in rituals by the groups, but reported source never observed any actual child abuse,” the declassified files stated.

On Feb. 5 and Feb. 6, 1987, police officers in Washington executed search warrants on two properties owned by the group—one residence and one warehouse.

During the search of the “Finders” properties, a Department of Justice review of case documents showed a United States Customs Service (UCSC) officer claiming “to have observed a substantial amount of computer equipment and documents purportedly containing instructions for obtaining children for unspecified purposes,” the FBI stated. “The instructions allegedly included the impregnation of female members of the community, purchasing children, trading children, and kidnaping (sic) them.”

The agent tried to gain access to the evidence for use in investigating violations of child pornography statutes as well as the Neutrality Act and the Mann Act.

After several paragraphs of redacted material, the FBI disclosed that someone “has alleged that the Finders are involved in a well-organized child abuse scheme, and that [redacted] in conjunction with the State Department, and the FBI’s foreign counterintelligence section, conspired to cover up those abuses.”

A March 9, 1987, memo to the FBI’s Washington field office, though, stated that “all evidence obtained” at the two “Finders” properties produced “no evidence of child sexual exploitation, kidnapping, or any related crimes.”

But a report from the Washington field office indicated that the warrant uncovered “large amounts of documents dealing with child rearing and shaping … along with manuals for master plans and ‘dirty tricks’ for enemies of the Finders group.”

And a chronology of the “Finders” probe stated that a third search executed on a rural Virginian farm by Virginia state police uncovered “evidence of satanic/cult ritual.” A Metropolitan Police Department document stated that Virginia State Police went to the farm in Madison County, Virginia and found cages that “witnesses revealed were used to keep children during their visits to the farm.”

The group who was living on the farm attempted to “take over the city government in Culpepper Virginia,” the file stated.

Later, someone contacted the Washington police “and advised that all reports regarding Finders are to be classified at the Secret level. [redacted] also advised that no information was to be turned over to the FBI WFO for investigation and that the WFO would not be advised of the [redacted] involvement/contact.”

“Children discovered in Tallahassee were eventually turned over to individuals claiming to be parents or guardians. No further MPD, FBI, or Customs involvement,” the chronology stated. “As far as is known, no details of [redacted] involvement ever became public.”

The FBI said it spoke with the chief of the Tallahassee Police Department on Nov. 16, 1993, and he said all the evidence discovered in the probe of the Finders was either returned to its owners or destroyed. No outside agency tried to influence his department’s investigation, he said.

‘Responding to People in Emergencies’

A joint investigation by the Metropolitan Police Department and the FBI’s Washington field office led to the identification of the mothers of the six children found in Florida, as well as two of the fathers and several other key members of the “Finders.”

All of the people interviewed “claimed their group consisted of an alternate communal type life style made up of intellectuals who have chosen to live the way they do,” the FBI wrote. “The mothers were all aware that the children had been taken to Florida on a trip,” and said they trusted the two men who had been arrested.

One of the group members told investigators that the group was formed in 1972 “with the idea of responding to people in emergencies,” according to one of the files. “The group gathered information for people or companies” and was initially based out of 1307 4th Street, N.W., in Washington.

The person “described the [redacted] as mysterious, and related that no one usually knew where he was,” according to the Feb. 7, 1987, interview.

Everyone interviewed from the group, including the mothers and fathers, “stated emphatically that no one in their group engaged in sex with children, that no ritualized abuse occurred, that the ‘Finders’ are not a satanic cult, and that the children are in fact the offspring of the mothers interviewed.”

Eleven days later, an assistant U.S. attorney, whose name was redacted, at the U.S. attorney’s office for the District of Columbia, declined prosecution, citing no evidence of a federal violation.

The group member disclosed other details, but those were mostly redacted. At one point, he said, members of the “Finders” were in a custody battle over the group’s property assets.

According to a chronology of the investigation, 21 former Finders were interviewed about the group and said the organization “began as an alternative life style in the 1960’s and many of them became disenchanted with the quasi-military order under the direct supervision of [redacted]. Many of the former members stated that they feared retribution from the Finders organization.”

In one case, a former female member needed police intervention to stop harassment from the Finders and in another case, something was “burned down and remains a open arson.”

Family members who spoke to detectives “stated that [redacted] had brainwashed their children” and “prevented any contact with their children or grandchildren.”

At one point, Finders “attempted to take over” a family residence and force a woman out of her own home.

A detective with the Metropolitan Police Department said a woman called the department’s intelligence division several months prior to the search warrants in December 1986, and said she had information concerning a cult operating in Washington and Maryland. She said in an interview that “a group of individuals were trying to introduce her into a cult and explained the nature and circumstances of this cult,” the detective wrote. She was told that the group “was unusual” but “were committing no criminal offenses” and police wouldn’t be interested unless they were.

The woman contacted a detective again the next month “and stated that some of the members were interested in exploring satanism.” The detective told her that “satanist [sic] are not criminal” but he “was interested in ascertaining what activity this group was involved in.”

After the children were found in Florida the following month, they were interviewed by detectives.

The children told Tallahassee police officers that they were “enroute to a ‘smart school’ in Mexico and could not give any positive information concerning their parents,” according to a file.

The children were all extremely hungry and urinated and defecated on the floor during the interviews.

The children “also talked about other children in Washington D.C., and stated that they were under the control of the ‘game caller,’ [redacted],” the file stated.

According to the original file, the children were being “weaned” from their mothers and didn’t go to school. When asked what the men taught them, they said games and how to read. The games included taking a shirt with holes in it, running away, and tearing it up. They said they did things for rewards.

Two children also described a time around Christmas when women had come downstairs naked, and said they thought it was funny and part of a game.

The full declassified records can be accessed here.