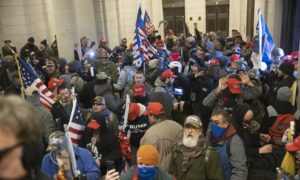 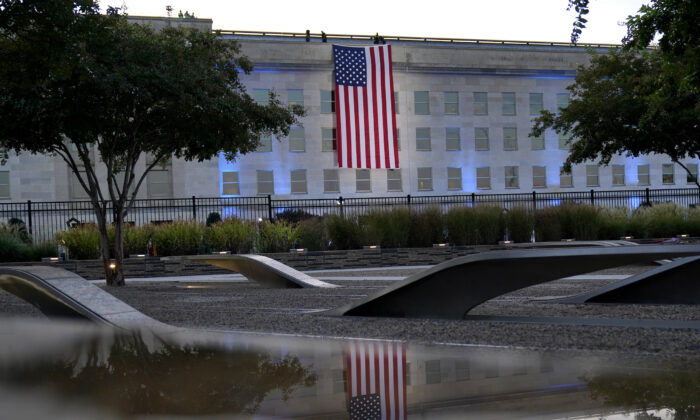 An American flag is unfurled at the Pentagon in Washington at sunrise on the morning of the 20th anniversary of the terrorist attacks on Sept. 11, 2021. (Alex Brandon/AP Photo)
US News

The FBI over the weekend released the first previously declassified document about the Sept. 11, 2001, terrorist attack hijackers, responding to an order handed down by President Joe Biden days earlier.

On Sept. 11, a 16-page heavily redacted document (pdf) that was written in 2016 sheds light on the logistical support that was given to some of the Saudi Sept. 11 hijackers. Families of victims who died during the 2001 attacks have long sought the declassification of the report, as well as other documents related to the incident.

According to the document, the FBI didn’t find evidence that linked the Saudi government to the terror attacks, although 15 of the hijackers were Saudi nationals. Previously, a U.S. commission said it had no evidence that Saudi Arabia directly funded al-Qaeda, the terrorist group that was long suspected of directing the terrorist attacks.

The families of about 2,000 people who died in the attacks, as well as thousands more who were injured or suffered financial losses, have filed lawsuits against Saudi Arabia seeking billions of dollars.

The newly declassified document reveals the FBI’s work to investigate the logistical support that a Saudi consular official and a suspected Saudi intelligence agent in Los Angeles allegedly provided to two of the terrorists who hijacked planes. It details several connections and witnesses’ testimonies that prompted the FBI to investigate Omar al-Bayoumi, who was suspected of being an intelligence agent and allegedly provided “travel assistance, lodging, and financing” to help the two hijackers.

Hijackers Nawaf al-Hazmi and Khalid al-Mihdhar were assisted by al-Bayoumi when the pair first arrived in the United States in 2000. They met via a “chance encounter” at a restaurant before he helped them.

Family members of the Sept. 11 attack victims released a statement saying that the Saudi government was most likely complicit.

“Even with the unfortunate number of redactions, the report contains a host of bombshell new revelations, implicating numerous Saudi government officials, in a coordinated effort to mobilize an essential support network for the first arriving 9/11 hijackers, Nawaf al Hazmi and Khalid al Mihdhar,” 9/11 Families United said in a statement over the weekend. “The range of contacts at critical moments among these Saudi government officials, al-Qaeda, and the hijackers is stunning.”

But the Saudi government, ahead of the release of the document, denied any connection to the attacks. The United States and Saudi Arabia have long been allies and even coordinate with one another on counterterrorism issues, with the United States having sold the kingdom tens of billions of dollars in weapons in recent years.

“As past investigations have revealed, including the 9/11 Commission and the release of the so-called ’28 Pages,’ no evidence has ever emerged to indicate that the Saudi government or its officials had previous knowledge of the terrorist attack or were in any way involved,” the Saudi embassy said in a recent statement.

The document was released after an executive order was handed down by Biden earlier this month directing the Department of Justice, which oversees the FBI, to review classified information. It came after Sept. 11 victims’ families called on the president to do so and said that if he didn’t, Biden shouldn’t attend any of their memorial events.