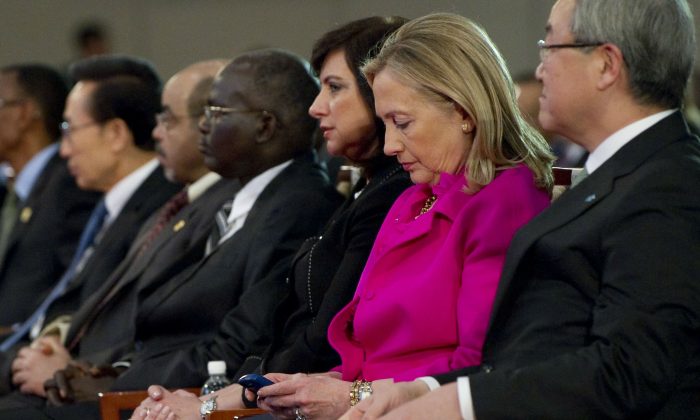 Then Secretary of State Hillary Clinton checks her BlackBerry while attending a forum in Busan, South Korea, on Nov. 30, 2011. (Saul Loeb/AFP/Getty Images)
Politics

The FBI released a summary of an interview it did with Hillary Clinton as part of its investigation into her handling of classified information.

“We are making these materials available to the public in the interest of transparency,” said the FBI in a press release on Sept. 1.

The Democratic presidential candidate was accompanied by her attorneys and aides during the interview on July 2.

The records show that Clinton failed to recall certain emails or incidents. The FBI also said that Clinton “could not recall any briefing or training by State related to the retention of federal records or handling classified information,” among other topics.

The FBI summary says Clinton sent an email to former Secretary of State Colin Powell on Jan. 23, 2009, to inquire about the use of a BlackBerry while she served in office. Powell warned Clinton that if it became “public” that she had a BlackBerry and used it to “do business” her emails could become “official records and subject to the law.”

“Be very careful. I got around it all by not saying much and not using systems that captured data,” said Powell according to the interview.

The FBI says it does not have possession of any of Clinton’s 13 mobile devices which “potentially were used to end e-mails using her clintonemail.com adresses.” Since the FBI was unable to, the agency could not determine whether the devices were compromised. Clinton used five iPads during her time at the State Department, which were used to send and receive emails.

According to the FBI notes former Clinton aide Monica Hanley often bought replacement BlackBerry devices for the Democratic nominee while she was at the State Department. Hanley mostly bought the devices at AT&T stores in the Washington D.C. area. What happened to the previous devices after a new replacement would “frequently become unknown,” Hanley and Clinton aide Huma Abedin said.

“Cooper did recall two instances where he destroyed Clinton’s old mobile devices by breaking them in half or hitting them with a hammer,” said former Bill Clinton aide Justin Cooper according to the FBI documents. According to the FBI, Cooper was usually responsible for setting up the devices.

Clinton told the FBI she did not know that the marking “(C)” labeled messages that contained confidential information.

“When asked of her knowledge regarding TOP SECRET, SECRET, and CONFIDENTIAL classification levels of USG information, Clinton responded that she did not pay attention to the “level” of classification and took all classified information seriously,” said the FBI.

On March 2, 2015, the “New York Times” published a story titled: “Hillary Clinton Used Personal Email Account at State Dept., Possibly Breaking Rules.” A Clinton aide said that on March 25, 2015, he “had an ‘oh [expletive]’ moment” and deleted the Clinton archive mailbox from the PRN server and used BleachBit to delete the exported PST files he had created on the server system containing the former secretary of state’s emails.

6. Fears of Getting Hacked and Guccifer

The FBI investigation found “multiple occurrences of phishing and/or spear-phishing e-mails” sent to Clinton’s account while she was secretary of state. She received a phishing email from a personal account of a state official. Clinton replied to the message saying, “Is this really from you? I was worried about opening it!”

“In a separate incident, [redacted]  Abedin sent an email to [redacted] indicating Clinton was worried ‘someone [was] hacking into her email’ given that she received an e-mail from a known [redacted] associate containing a link to a website with pornographic material,” the FBI summary said.

The FBI summary also said the email account of Sidney Blumenthal, a former Clinton aide and confidant, was hacked by cyber hacker Guccifer in March 2013.

In a part of the summary that was heavily redacted, Clinton “stated deliberation over a future drone strike did not give her cause for concern regarding classification,” and she “understood this type of conversation as part of the routine deliberation process.”

The FBI released the summary after numerous Freedom of Information Act (FOIA) requests.