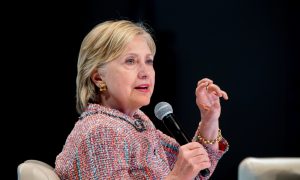 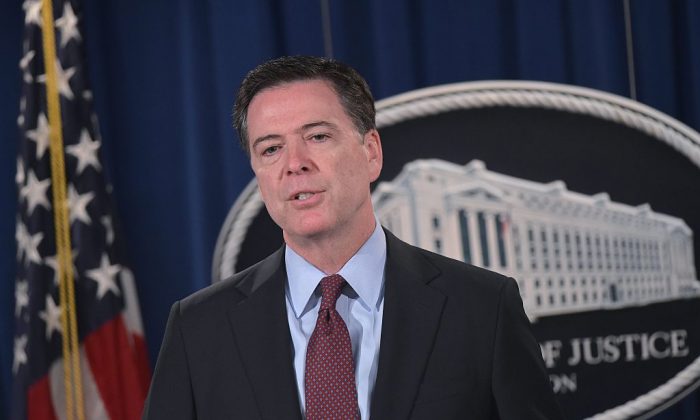 FBI Director James Comey speaks during a press conference at the Department of Justice on March 24, 2016 in Washington, DC. US Attorney General Loretta Lynch announced the unsealing of an indictment of seven Iranians on computer hacking charges. / AFP / MANDEL NGAN (Photo credit should read MANDEL NGAN/AFP/Getty Images)
US

Officials investigated the former Secretary of State’s handling of private emails and read approximately 30,000 emails Clinton handed over to the FBI in 2014 in a “painstaking undertaking,” said Comey. Within the approximately 30,000 emails, 110 emails in 52 email chains were determined by the FBI to be classified at the time of sending, Comey said.

He said Clinton should have known “an unclassified system was no place for that conversation.”

The agency also found several thousand work-related emails that were not given to the FBI because they were deleted over the years. Comey says those emails were not intentionally deleted, but were part of files that were periodically erased or purged.

Comey said Clinton used several different servers and used multiple devices to communicate. The FBI director said none of the emails should have been on an unclassified system, adding that even if files are not marked classified people should still be careful.

Comey said there is “no clear evidence” Clinton and her staff intended to violate laws, but said she was “extremely careless in handling classified information.”

“We cannot find a case that would support bringing criminal charges on these facts,” he said.

The announcement comes after the FBI interviewed Clinton for three and a half hours on Saturday.

Clinton Interviewed by the FBI About Private Email Server

The announcement comes after a controversial meeting between Attorney General Loretta Lynch and the presidential candidate’s husband, Bill Clinton, at an airport in Phoenix.

Comey said there was no outside influence on the FBI’s recommendation, and that the case was handled “honestly,” adding “we did our investigation the right way.”