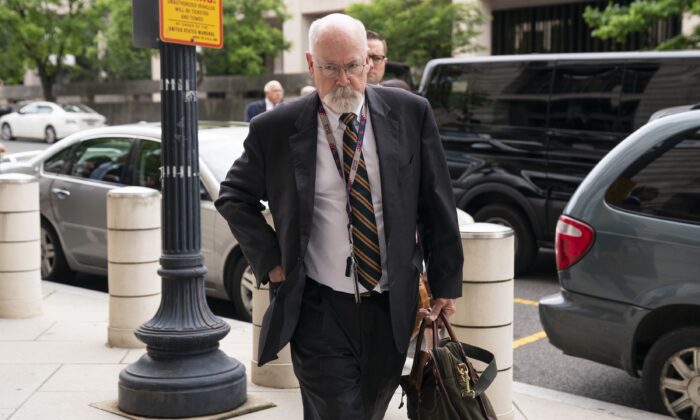 Special counsel John Durham filed a pretrial motion in limine on Sept. 13 in his false statements case against Igor Danchenko, the primary sub-source of Christopher Steele’s dossier on former President Donald Trump. Danchenko, who is charged with five counts of lying to the FBI about his sources for the dossier, had earlier filed a motion to dismiss the charges against him.

Motions in limine are routine motions that are used to determine what evidence may and may not be used at trial. Danchenko’s trial is scheduled to begin next month.

However, Durham’s motion is anything but routine and contains a series of stunning revelations about Danchenko.

Perhaps the most stunning disclosure is that Danchenko was given confidential human source (CHS) status by the FBI in March 2017. Notably, this was after Danchenko had disowned the Steele dossier in a January 2017 FBI interview, having admitted that it was based on gossip and rumors. Given the admission, there was no legitimate reason to extend the protections of CHS status to Danchenko, who no longer had any bona fide value to the FBI’s investigation into alleged Trump–Russia collusion.

In fact, the FBI’s investigation ought to have ended as soon as Danchenko disclosed the true provenance of Steele’s reporting.

The FBI’s goal in giving Danchenko the highly coveted CHS status appears to have been to take Danchenko off the grid. As a CHS, Danchenko enjoyed special protections and privileges. Crucially, the FBI was able to use his status to conceal Danchenko and his disclosures from congressional inquiries, such as the investigation by then-Rep. Devin Nunes led by Kash Patel. Other inquiries, such as Freedom of Information Act requests, could similarly be stonewalled by reference to the “sources and methods” justification for concealing the identity, and even the existence, of a CHS.

The FBI had huge incentives to hide Danchenko. Although Danchenko told the FBI several lies in what Durham now describes was an attempt to reconcile what Danchenko had told Steele, the overarching message from Danchenko was that the dossier was untrue. This effectively ended any legitimate inquiry into Trump–Russia collusion. Danchenko’s disavowal also meant that the FBI’s Foreign Intelligence Surveillance Act (FISA) warrants against Trump campaign adviser Carter Page—which were issued based on the Steele dossier—were effectively invalidated.

The FBI had a legal duty to inform the FISA court about Danchenko but failed to do so. In fact, they successfully applied for two further FISA warrants against Page on the basis of the Steele dossier which they knew to be false.

The timing of Danchenko’s elevation to CHS status coincided with two major developments. First, on March 20, 2017, then-FBI Director James Comey told Congress that the Trump campaign was under investigation for alleged ties to Russia. At the time, Comey knew that Danchenko had shredded the investigation’s predicate, yet he chose to forge on regardless. Second, also in March 2017, Nunes found out from a whistleblower in the intelligence community that the Trump transition team had been spied on. Nunes complained that Congress hadn’t been given that information.

As head of the House Intelligence Committee, Nunes immediately ratcheted up his own investigation into the Trump–Russia matter. That investigation would lead to the Nunes memo in February 2018. However, the Nunes memo made no mention of Danchenko or of the fact that he had disavowed the dossier. After the FBI put Danchenko on their CHS payroll, he was completely off the grid and any information about him was withheld from Congress under the “sources and methods” justification.

The FBI’s apparent scheme to bury Danchenko seems to have worked as planned. Neither Nunes nor anyone else knew about Danchenko or his disavowal of the Steele dossier until December 2019, when Justice Department (DOJ) Inspector General Michael Horowitz issued his report on the FBI’s FISA abuses. Horowitz didn’t disclose Danchenko’s name and provided very little information other than that Steele had a primary sub-source whose story differed from the one told by Steele himself.

It wasn’t until July 2020 that a group of online sleuths, including myself, were able to extrapolate Danchenko’s name from various data points in Horowitz’s report, as well as from heavily redacted interview notes published by Sen. Lindsey Graham (R-S.C.).

With the identification of Danchenko, any remaining credibility of the Steele dossier collapsed. Contrary to the FBI’s claims, Danchenko wasn’t a Russian-based source with access to Kremlin insiders. Instead, he was a Beltway insider who had spent a number of years working at the Democratic-leaning Brookings Institution, where anti-Trump impeachment witness Fiona Hill was his mentor.

Yet the FBI continued to pay Danchenko, as well as maintain his CHS status, until October 2020. By then, Durham had already been investigating the origins of the Trump–Russia probe for 19 months. It also isn’t known when Durham found out about Danchenko’s CHS status. It’s likely that Danchenko’s CHS status was revoked after then-Attorney General William Barr disclosed in September 2020 that Danchenko had been suspected of working for Russian intelligence.

That fact was known to the FBI since 2009, but Barr’s public disclosure may have forced the bureau’s hand.

It appears that the sole purpose of making Danchenko a CHS was to conceal FBI malfeasance from Congress, from the FISA court, and from the public; that opens up new avenues for Durham to criminally pursue FBI officials. These officials include former FBI Director James Comey, former Deputy Director Andrew McCabe, former head of counterespionage Peter Strzok, and Danchenko case agent Brian Auten.

It was thought that the statute of limitations for bringing charges against FBI officials had lapsed earlier this year, when five years had passed from the time the officials took their respective actions. However, it now appears as if the time limit has been extended because the FBI continued employing Danchenko under false pretenses until October 2020. That gives Durham plenty of time to pursue FBI officials, if he’s so inclined.

Aside from the CHS revelations, Durham’s new motion also sheds light on the above-mentioned incident in which Barr disclosed that, while Danchenko was employed by the Brookings Institution, he allegedly had approached two fellow employees and told them that if they “had access to classified information” and wanted “to make a little extra money,” he knew “some people to whom they could speak.”

After the incident was reported to law enforcement in 2009, the FBI opened a “full investigation” into Danchenko after learning that he “(1) had been identified as an associate of two FBI counterintelligence subjects and (2) had previous contact with the Russian Embassy and known Russian intelligence officers.”

Until Sept. 13, the status of that investigation remained unknown. Durham now has revealed that the FBI closed the investigation into Danchenko in 2010 because it “incorrectly believed” that he had left the country.

It isn’t known whether Durham believes the FBI’s threadbare explanation. It’s noteworthy that Durham hasn’t charged Danchenko with lying about his contacts with Russian intelligence officers. During his January 2017 FBI interview, Danchenko claimed not to know or have met with any such officers.

It’s also notable that Durham hasn’t charged Danchenko with lying about the infamous “pee tape” story. The dossier claims that the story originated in June 2016 from a senior Western employee at the Ritz-Carlton Hotel in Moscow. However, Durham has now revealed that his office tracked down the only Western hotel employee at the time, a German national.

According to Durham, that German national will testify at Danchenko’s trial that he never met Danchenko and had never heard of the pee tape story until the media started reporting about the dossier in 2017.

Similar to the situation involving the Russian intelligence officers, it isn’t known why Durham hasn’t charged Danchenko specifically with lying about his supposed interactions with the German hotel manager. Given the massive interest that the pee tape story generated, it would have seemed to be a natural path to pursue, in particular since the hotel manager is able and willing to testify in court.

The manager’s account is backed up by Charles Dolan, a political adviser with connections to Bill and Hillary Clinton. According to Durham, Dolan will testify at Danchenko’s trial that he and Danchenko had traveled to Moscow in June 2016 but that, unlike Dolan, Danchenko didn’t stay at the Ritz-Carlton and didn’t meet the German hotel manager. It appears that Danchenko made up the pee tape story from whole cloth, falsely attributing it to the German manager whom he never met.

While Danchenko is charged with lying about his interactions with Dolan, Durham is asking the court to also allow the hotel manager to testify as a means of demonstrating Danchenko’s “efforts to ​​fabricate and misattribute information reflected in the Steele Reports.”

In another stunning revelation, Durham has now disclosed that in February 2016, only a few months before his dossier work, Danchenko briefed the managing partner of a business intelligence firm on how to fabricate sources. According to Durham, Danchenko’s advice to the partner was that if there were no sources, one should “use oneself as a source” while obscuring this fact by citing others “to save the situation.”

Although Danchenko’s interactions with the business intelligence partner aren’t directly tied to the dossier or to Danchenko’s alleged lies to the FBI, Durham is asking the court to allow that information to be presented to the jury as a means of showing Danchenko’s modus operandi in fabricating sources.

While Durham’s latest revelations are extremely damning for Danchenko, they are far more damning for the FBI who appears to have perfidiously used the CHS mechanism to take Danchenko off the grid and bury the fact that he had disavowed the dossier. By doing so, FBI leadership deceived Congress, the courts, the DOJ’s inspector general, and the public. Worst of all, they did it in order to be able to continue with their efforts to take down then-President Trump.

While Danchenko’s chances of conviction have risen considerably with these latest revelations, Durham’s filing shows that the real prize is FBI leadership. Whether Danchenko is convicted is largely meaningless if FBI leadership isn’t held to account.