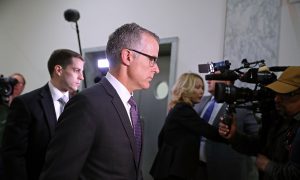 FBI Officials ‘Widely Ignored’ Rules in 2016, With Dozens in Contact With Reporters: Watchdog

FBI policy strictly limiting which employees can speak to reporters was “widely ignored” in 2016, with over 50 officials having contact that year with one or more reporters using government-issued devices, a watchdog found.

The Department of Justice’s Office of Inspector General (OIG) probed allegations that FBI employees improperly disclosed non-public information in 2016 before the presidential election in violation of bureau rules.

Staffers at the OIG’s office interviewed 56 current and former FBI employees who were identified as having contact with reporters in 2016. Nearly all of them acknowledged the contacts but denied providing non-public information. Many also claimed they were authorized to be in touch with the media, either by FBI policy or by a supervisory official.

There could well be more employees who were in touch with reporters using their personal devices or face-to-face, the OIG said in the report on its investigation (pdf) released this week.

The probe was hampered by what the FBI described as a gap in its collection of text messages from bureau-issued devices for four of the people in contact with the media. The OIG asked for the government-issued phones to fill the gap, but the FBI couldn’t locate the devices that the employees were using in 2016.

Additionally, the large number of employees in touch with reporters made pinpointing the source of the leaks difficult.

The OIG was unable to figure out which agents or officials were the source of leaks.

However, it was able to confirm that six employees at the FBI’s headquarters in Washington were not authorized by policy to have contact with the media and referred those to the bureau to determine if the conduct warrants disciplinary action.

The same watchdog previously found misconduct by three senior FBI officials for “unethical interactions with reporters.” One accepted sporting tickets from a reporter and lied to OIG investigators about paying for them, a second accepted a ticket valued at $225 to a media-sponsored dinner, and a third received “items of value” from reporters.

“The misconduct by these three senior officials, and the substantial media contacts identified by the OIG involving numerous other FBI employees, evidenced a cultural attitude at the FBI that was far too permissive of unauthorized media contacts in 2016,” the watchdog said.

That culture reached the top of the bureau. Former Director James Comey leaked to his attorneys classified information, some of which later appeared in the media.

The FBI declined to comment on the new report. In a letter to the OIG, Douglas Leff, the FBI’s assistant director, said the bureau has strengthened procedures guiding media contacts. For instance, the bureau has updated its training on media policy.

There is no indication that any of the employees who broke policies were punished in any way.

The FBI decided in 2018 that the penalties for violations of the rules are sufficient to deter unauthorized contact with the media, improper acceptance of gifts, and other misconduct.

“And the reality is you have that all the way to the top, you have Jim Comey himself who’s doing that stuff. So if you don’t hold people accountable, how is anything ever gonna change? Otherwise it’s just lip service,” added Parlatore, who is involved in ongoing litigation with the FBI over Page’s case.

The OIG found found that agents assigned to the case made “at least 17 significant errors or omissions.” One FBI lawyer, Kevin Clinesmith, pleaded guilty to manipulating an email from saying Page was a CIA asset to saying he was not, and sending it along to be used to bolster the case to get secretive warrants to spy on Page. Clinesmith was sentenced to probation.