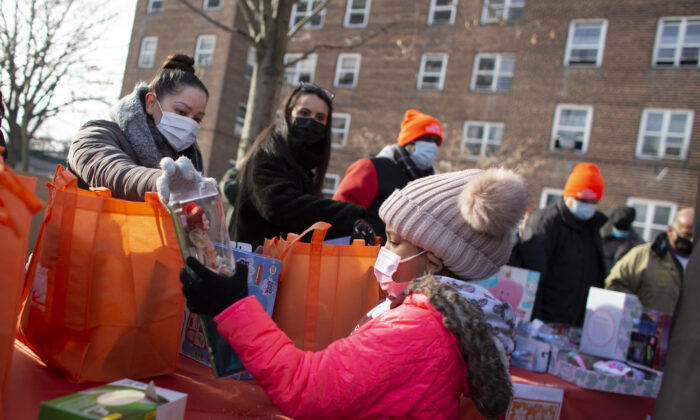 A girl receives a gift during a giveaway for people in need in a file photo. (Kena Betancur/AFP via Getty Images)
US News

“The companies and their owners received tens of millions of dollars in federal funds for use in providing nutritious meals to underprivileged children and adults,” FBI Special Agent Travis Wilmer wrote in an affidavit. “Almost none of this money was used to feed children. Instead, the participants in the scheme misappropriated the money and used it to purchase real estate, cars and other luxury items.”

In 2020, the United States Department of Agriculture (USDA) eased its rules for feeding hungry kids to allow restaurants and other places to distribute food, including multi-day meals consumed off-site, citing COVID and closed in-person schools.

“We are driven by a single goal; making participation in the USDA Child and Adult Care Food Program safe and easy for our community partners,” Feeding Our Future’s website says. “We ensure programs are easily able to receive funding to purchase nutritious meals and snacks.”

Minnesota Department of Education (MDE) reimburses local organizations with federal dollars. In summer 2020, reporting deficiencies and rapid growth in FOF-sponsored sites grabbed MDE’s attention. Once FOF couldn’t explain the drastic increase of meals or multiple paperwork errors, MDE reported the nonprofit to the USDA Office of the Inspector General in October 2020 and tried to stop payments.

A month later, FOF sued MDE tried for not processing more than 50 applications for millions of dollars and won.

By May 2021, authorities were investigating.

On Jan. 20, 2022, more than 200 law enforcement personnel searched more than a dozen Twin Cities locations linked to the probe but no arrests were made. Afterward, MDE moved to terminate the contract and issued a “stop pay” order.

The crackdown ensnared Abdi Nur Salah, who was a senior policy aid at the office of Minneapolis Mayor Jacob Frey before his firing, the Sahan Journal reported.

The U.S. Attorney’s Office listed 14 properties, including the one Salah allegedly helped purchase that’s connected to the alleged fraud.

FOF Director Aimee Bock has denied any wrongdoing. The group has filed for dissolution after the feds froze all remaining funds. The warrants say FOF employees and multiple business operators enacted shell companies to conceal the stolen funds.

“To date, the conspirators have stolen millions of dollars in federal funds,” the FBI said in January 2022. “The scheme is ongoing.”

In February, Senate GOP members called for the state to audit federal food aid programs and account for billions of COVID spending.

“It’s simply outrageous that nearly $200 million of money provided to feed children in need was abused in this way,” Chamberlain said in a statement. “With resources precious, it’s imperative government agencies ensure every dollar is going to programs with robust track records so we can know not a single dime is wasted.”