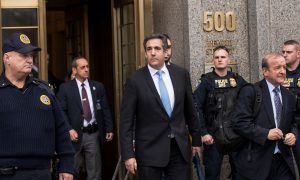 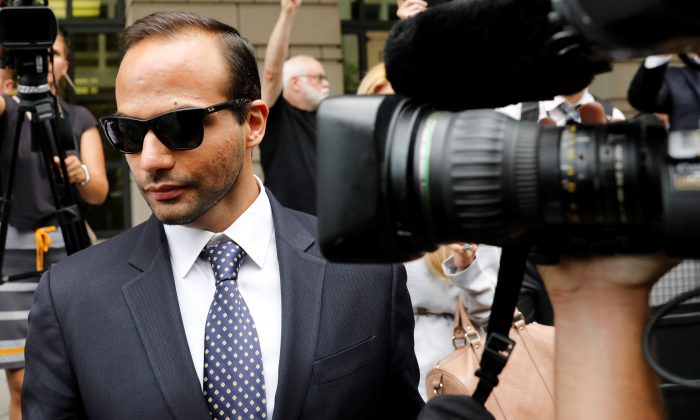 The documents also shed light on the unusual timing of Papadopoulos’s agreement with Mueller’s team, which was reached within hours after he was arrested—without a lawyer present.

On July 27, 2017, Papadopoulos flew into Washington Dulles International Airport at 7 p.m. from Munich, Germany. He was arrested by the FBI immediately upon arrival. No warrant, indictment, or criminal complaint was used during his arrest.

Papadopoulos was booked several hours later, at 1:45 a.m. on July 28, and was checked out to “federal authority” at 8:27 a.m. that morning. Papadopoulos then made a same-day appearance in court, with all of that done without a defense attorney present.

Despite the lack of legal representation, Papadopoulos agreed to cooperate with the Mueller investigation and his case was sealed.

On Oct. 5, 2017, Papadopoulos—in a closed courtroom—entered a plea of guilty for lying to the FBI. Documents surrounding the Papadopoulos case then were unsealed on Oct. 30, 2017—the same day an indictment was unsealed against Paul Manafort and Rick Gates.

The specific timing of Papadopoulos’ arrest appears strangely coincidental. It was that same day—July 27, 2017—that Special Counsel Mueller and Deputy Attorney General Rosenstein were informed by Inspector General Horowitz of his discovery of the Page–Strzok texts. From a Dec. 13, 2017, letter that Department of Justice Inspector General Michael Horowitz sent to Senators Ron Johnson and Chuck Grassley:

“On July 27, 2017, upon our identification of many of the political text messages, the Inspector General met with the Deputy Attorney General and the Special Counsel to inform them of the texts that we had discovered, and provided them with a significant number of the texts, so that they could take any management action they deemed appropriate.”

This sequence of events wasn’t Papadopoulos’ first interaction with the FBI.

Papadopoulos had been extensively interviewed by FBI Agent Robert M. Gibbs exactly six months earlier, on Jan. 27, 2017. During the interview, Papadopoulos made “material false statements and omitted material facts” to the FBI.

A follow-up FBI interview took place on Feb. 16, 2017. The next day, Papadopoulos deleted his Facebook account. According to the FBI, “that account contained communications with Russian nationals and other foreign contacts during the Campaign that contradicted statements he had made to the FBI.”

Papadopoulos had maintained the same Facebook account since 2005. A few days later, on Feb. 23, 2017, Papadopoulos got rid of his cell phone and changed phone numbers.

There are two legal versions of events relating to Papadopoulos.

One from the July 28, 2017, affidavit signed by FBI Agent Robert M. Gibbs, and one from the Oct. 5, 2017, Statement of the Offense “signed” by Robert Mueller–and undersigned by Jeannie S. Rhee, Andrew D. Goldstein, and Aaron S.J. Zelinsky.

To the casual eye, these documents provide a relatively similar version of events, although there are some differences:

The Mueller version has a tendency to emphasize Papadopoulos’s Russian contacts and the Gibbs version presents events in a slightly differing timeline format, but the overall presentation of events remains reasonably similar through June 1, 2016.

However, after June 1, 2016, the Mueller version suddenly becomes vague, in relation to direct foreign contacts by Papadopoulos:

“From mid-June through mid-August 2016, PAPADOPOULOS pursued an ‘off the record’ meeting between one or more Campaign representatives and ‘members of president putin’s office and the mfa.’ For example, on or about June 19, 2016, after several email and Skype exchanges with the Russian MFA Connection, defendant PAPADOPOULOS emailed the High­-Ranking Campaign Official, with the subject line ‘New message from Russia.'”

The Gibbs version contains a bit more information for this period, listing four separate contacts with Timofeev in July 2016 and one belated contact with Mifsud in October 2016.

The Mueller version simply doesn’t address this contact and the Gibbs version fails to identify or provide any more detail on the “particular individual with extensive ties to Russian-based businesses and persons.”

But an article in The Daily Caller provides some crucial information:

“Mangiante [now married to Papadopoulos], an Italian national, confirmed to The DCNF that [Sergei] Millian is the individual Papadopoulos described in a July 22, 2016, Facebook message that is cited in documents the special counsel’s office released in October.

“Papadopoulos and Millian met days after the July 22, 2016, Facebook message.”

The Wall Street Journal has reported on Millian as being both Source D and E in the Steele dossier. There are all kinds of questions surrounding Millian. The fact that he was meeting with Papadopoulos in July 2016 is material. So why did the Mueller team specifically ignore this entire sequence of events in their Oct. 5, 2017 unsealed Statement of Offense. The Gibbs version provides a bit more detail but also fails to note the Millian meeting.

The same day that Papadopoulos sent his Facebook message to Timofeev regarding Millian, Australia supposedly told the FBI of comments Papadopoulos made during his fateful meeting with Alexander Downer. These comments would be offered as the basis for the opening of the FBI’s Counterintelligence investigation on July 31, 2016.

Second or even third-hand comments from Millian had already made their way into the July 20, 2016 memo in the Steele dossier, forming some of the most outlandish bits of the document.

Additional information stemming from Millian would appear in later dossier memos as well. But the legal descriptions of events specifically ignore the potentially important meeting between Papadopoulos and Millian.

One other meeting also ignored in the legal documents—the May 10, 2016 meeting between Papadopoulos and Alexander Downer. That’s the same meeting the FBI used as justification in the opening of their Counterintelligence investigation into an opposing candidates political campaign.