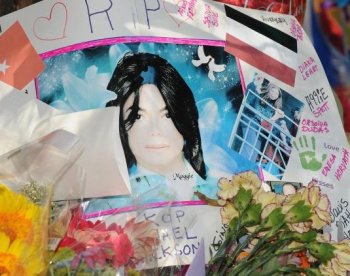 Posters, signs, candles and flowers are left by fans at a makeshift shrine outside the Jackson family compound in Encino, California on June 28, 2009. The FBI released their Michael Jackson files to the public. (Robyn Beck/AFP/Getty Images)
Entertainment

Michael Jackson died unexpectedly at the age of 50 from an overdose of medication administered by his doctor in June 2009. Almost five months after his death, the FBI has now made the majority of their files on Michael Jackson available for public viewing.

After peaking in his career as a pop music superstar in the 1980’s, Michael Jackson started to make a new name for himself in California's legal system starting in the early 90's. The FBI investigated Jackson for sexual misconduct with children on two occasions in California but the actual charges for which he was summoned to court were brought forth by the State of California.

The FBI started their files when Jackson was the victim of an extortion in 1992. The defendant was found guilty and imprisoned in 1993 and the occurrence had little impact on Jackson’s well being.

In 1992 Jackson was accused of behaving inappropriately with a young fan which led to a ten year long investigation by the FBI. Details of this investigation, along with a multitude of other reports than spanned three continents, were released.

The FBI files are listed online and contain 333 pages of information. They include two instances where the FBI took part in cases in the Phillippines and London. They are available for complete viewing by visiting http://foia.fbi.gov/ . Many sections were edited to protect the anonymity and privacy of the alleged victims involved in the alleged sexual abuse.

Jackson’s struggle with child molestation accusations span from 1993 to 2005. Jackson was summoned to court for two trials in two separate cases that attracted worldwide media attention. He was finally acquitted of all charges in June 2005.