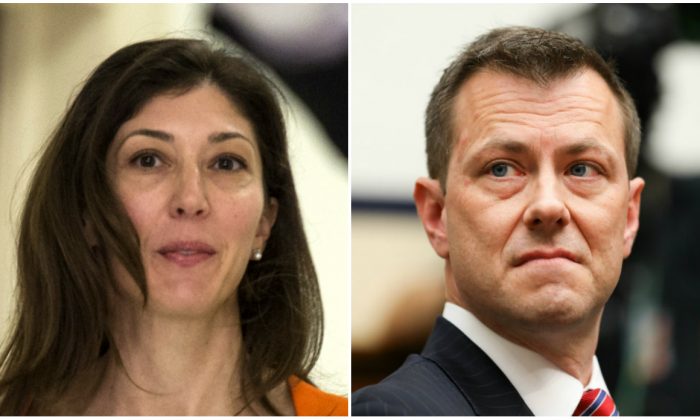 A report by the Justice Department watchdog issued on Dec. 13 shows that someone wiped the data on the smartphones assigned to notorious FBI officials Peter Strzok and Lisa Page during their work for the Russia probe by special counsel Robert Mueller.

After the appointment of the special counsel in May 2017, Strzok and Page—who had an extramarital affair—joined Mueller’s team. Both worked on the investigation briefly, with Page leaving on May 28, 2017, and Strzok being removed in late July.

Strzok and Page entered the national spotlight in January 2018 after their text messages became public, revealing the pair detested President Donald Trump and favored Hillary Clinton while working on high-profile investigations in 2016 and 2017 involving both Trump and Clinton.

Text messages sent between the pair are crucial to the perception of the Mueller probe and ongoing court cases. Strzok was one of the FBI agents who interviewed then-national security adviser Michael Flynn. Flynn is now facing sentencing in relation to false statements he made during the interview.

The Office of the Inspector General (OIG) attempted to recover the special counsel iPhones issued to Page and Strzok as part of an investigation into actions taken by the Department of Justice (DOJ) and FBI during the 2016 election. But the OIG was unable to recover any data because both phones were reset to factory settings before investigators recovered them, according to the watchdog’s report (pdf).

The circumstances and timing surrounding the deletion of data on Page’s phone are particularly questionable. The phone was reset to factory settings days after Mueller learned of the biased texts between Strzok and Page. The device then went missing for 14 months before another DOJ unit located it and turned it over to the OIG.

Days after Page’s phone was wiped, Strzok’s phone was reviewed by a special counsel records officer who can’t remember if the device contained any text messages. Afterward, at an unknown date, the phone was reset to factory settings, assigned to another agent, and turned up six months after Strzok was removed from Mueller’s probe.

A separate DOJ unit located Page’s phone 14 months after she left the probe and turned it over to the OIG. Once the phone was finally examined in September this year, the OIG determined that someone had wiped all of the data by resetting the device to factory settings two weeks after she left Mueller’s team. There is no record of who handled the phone and who returned it to factory settings.

Page’s phone was wiped four days after DOJ Inspector General Michael Horowitz notified Mueller of the problematic texts between Strzok and Page on July 27, 2017. Mueller removed Strzok from the Russia probe sometime before the end of the month. A records officer at the special counsel’s office examined Strzok’s phone on Sept. 6, 2017. The officer does not remember if there were any text messages on the phone, according to the report. The officer did remember making an identical entry for another phone the same day that had no text messages.

The OIG examined six phones belonging to Page and Strzok recovering thousands of messages over the course of several rounds of digital forensics. The messages became some of the most damning evidence of bias among officials conducting the investigation into Clinton’s use of an unauthorized private emails server and the probe of alleged collusion between Trump-campaign associates and Russia.

In addition to revealing the intense bias, the text messages showed that Strzok and Page spoke about stopping Trump from becoming president, discussed an insurance policy in case Trump won the presidency, and mused about impeachment after Trump won–all while being part of an investigation into the Trump campaign.

The office of the Deputy Attorney General told the OIG that department-issued phones are reset to factory settings after they are turned in, so they can be re-issued in the future.

In addition to the issues with the phones Strzok and Page used during their work for the special counsel, the OIG report revealed additional details of the watchdog’s quest recover all of the pair’s text messages from six phones they used in 2016 and 2017. The OIG ultimately concluded that it could not recover all of the texts.

“So where are all the missing Text messages between fired FBI agents Peter S and the lovely Lisa Page, his lover. Just reported that they have been erased and wiped clean,” Trump wrote on Twitter on Dec. 6. “What an outrage as the totally compromised and conflicted Witch Hunt moves ever so slowly forward. Want them!”