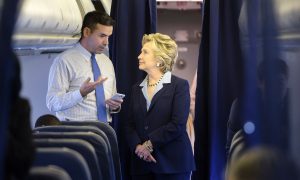 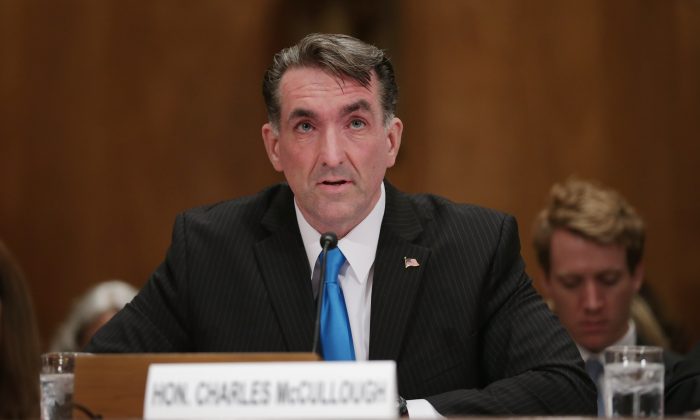 The FBI lost notes from a 2015 meeting with people from the office of the Intelligence Community Inspector General (ICIG), according to newly released FBI records on the investigation of former Secretary of State Hillary Clinton’s alleged mishandling of classified information.

The news raises concern that some information about an explosive lead passed by the ICIG to the FBI now might be lost.

The lost notes memorialized a meeting that took place on Aug. 3, 2015, less than a month after the ICIG made a referral to the FBI that classified information may have been disclosed in an unauthorized manner to a foreign power because Clinton conducted State Department business through an email hosted on an insufficiently secured server in her basement.

The ICIG-FBI meetings hold special significance because it was allegedly several of these meetings where the ICIG officials passed a lead to the FBI about anomalies in the metadata of the emails indicating that a copy of nearly every email was sent to an agent of a foreign power.

Several lawmakers, as well as the Justice Department’s Inspector General, publicly confirmed that then-ICIG Charles McCullough told them about the metadata anomalies and that the lead was communicated to the FBI. The FBI acknowledged that Clinton’s emails could have been breached by foreign actors who covered their tracks, but denied that any evidence of foreign infiltration was found. Several current and former senior FBI officials involved in the Clinton case denied in congressional testimonies any recollection of receiving the metadata lead.

Based on documents from a tranche released by the FBI around May 6, special agents from the FBI’s Washington field office were going through materials from the Clinton investigation so they could be released pursuant to a Freedom of Information Act (FOIA) request. On Feb. 4, they tried to find the ICIG meeting notes, which should have been in the case file based on information in the FBI’s electronic case management system. But the notes weren’t there.

An intelligence analyst who was previously assigned to the Clinton case reached out to the FBI staffer who originally wrote the notes.

“I know this is a shot in the dark, but do you still have the meeting notes that you wrote up concerning an 8/3/2015 MRE meeting at FBIHQ? I think [redacted] correct me if I’m wrong) that this meeting was with the ICIG, if that helps matters,” the analyst wrote in a Feb. 5 email, also saying the notes “never made it to the file.”

“I actually remember turning over my original notes for the file for this (it was right at the beginning of the case),” the staffer replied. “I gave them to [redacted] who was running the file then.”

All names have been redacted in the communications. The email indicates, however, that the staffer is now with the FBI’s Office of the Chief Information Officer, which manages IT services for the bureau.

A Feb. 12 document shows that the Washington Field Office considered the meeting notes missing, as the special agent who was to receive the notes from the staffer said he “documented all relevant case material before leaving the case and did not retain any notes or other case materials.”

Rep. Louie Gohmert (R-Texas), along with multiple anonymous sources, has alleged that Clinton’s server was compromised by a foreign hostile power, which was receiving Clinton’s incoming and outgoing emails.

That foreign power was China, using a company operating in northern Virginia, The Daily Caller reported, citing a former intelligence officer with expertise in cybersecurity issues and a government staff official—who both spoke on condition of anonymity.

The ICIG was examining the Clinton emails after it was asked by the State Department to check for classified information before the emails could be released pursuant to FOIA requests.

“When [the ICIG] did a very deep dive, they found in the actual metadata—the data which is at the header and footer of all the emails—that a copy, a ‘courtesy copy,’ was being sent to a third party and that third party was a known Chinese public company that was involved in collecting intelligence for China,” the former intelligence officer said.

He said he couldn’t disclose the name of the company.

“There are indications there are other ‘cutouts’ that were involved. I would be in a lot of trouble if I gave you the name,” he said.

There are a number of Chinese public state-owned companies with addresses in northern Virginia, including China Telecom Americas and China Unicom Americas, both in Herndon, right by the Dulles International Airport and less than 20 miles west of Washington.

But if a Chinese company was involved, it didn’t need to be a telecom firm, said Agostino von Hassell, president of corporate intelligence firm The Repton Group. All Chinese state-owned companies would be involved in collecting intelligence for the regime, he said in a phone call.

Gohmert didn’t specify whether the outside party was connected to China, saying only it was a foreign hostile power unrelated to Russia.

The former intelligence officer said the ICIG “discovered the anomaly pretty early in 2015.” The ICIG briefed the FBI on the matter on three separate occasions, according to the Daily Caller’s sources.

Fox News confirmed the reporting with two unidentified sources “briefed on the matter,” although it’s unclear whether those sources were different from The Daily Caller’s.

It’s not clear how many times the FBI and the ICIG met about the Clinton probe in general. It’s also unclear whether the Aug. 3, 2015, meeting pertained to the anomalies. It may now be difficult to verify as long as the meeting notes are missing.

During closed-door interviews, Rep. Mark Meadows (R-N.C.) questioned several current and former FBI officials about the metadata lead, including Peter Strzok, Lisa Page, Bill Priestap, Jonathan Moffa, John Giacalone, and James Comey. All told him they remembered nothing about the specific referral from the ICIG.

“Sir, I am—I do not recall a meeting where the ICIG made any reference to changes in the metadata,” said Strzok, the former FBI deputy assistant director who led the Clinton probe. “What I can tell you, congressman, is that our technical experts, any allegation of intrusion, any review of metadata that might be indicative of an act, was pursued by our technical folks, and I am very confident that they did that thoroughly and well. I am certainly unaware of anything that we did not pursue or had not pursued.”

According to transcripts of the interviews reviewed by The Epoch Times, Strzok was one of four FBI officials personally briefed on the metadata anomalies during one meeting with ICIG investigator Frank Rucker, the lawmakers learned from the ICIG. Others present at that meeting were then-Executive Assistant Director Giacalone and then-Section Chief Dean Chappell. It’s not clear who the fourth FBI official was.

Gohmert and Meadows didn’t respond to requests from The Epoch Times for comment.

The FBI declined to comment and referred The Epoch Times to the Justice Department Inspector General’s report on the Clinton email investigation. The report made no mention of the lost notes or the ICIG referral regarding metadata anomalies.

Update: The article has been updated with information regarding a response from the FBI.