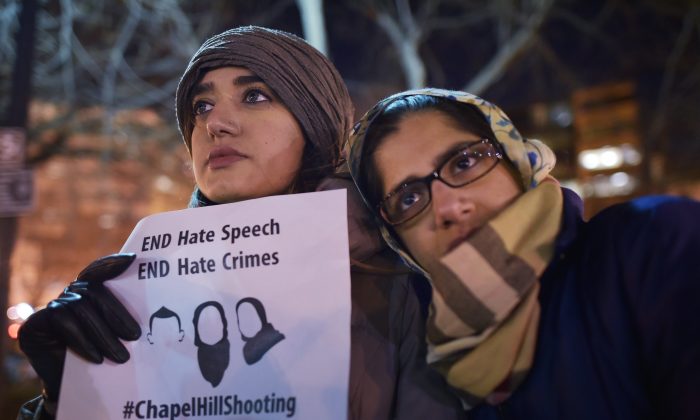 The FBI began an investigation of the deaths as a possible hate crime. It announced that it had “opened a parallel preliminary inquiry to determine whether or not any federal laws were violated related to the case.” Local officials are also investigating.

“We welcome the FBI’s increased involvement in this tragic case and hope the added resources and expertise the bureau has to offer will help see that justice is served,” said CAIR National Executive Director Nihad Awad in a statement Friday. “This case is quickly becoming a touchstone for the American Muslim community’s sense of security and inclusion.”

Suspect Craig Stephen Hicks, the victims’ 46-year-old neighbor has been charged with three counts of murder. He turned himself in to police soon after the execution-style shootings. Early reports said police identified the motive as a dispute over parking, but the victims’ families and others have asked if Hicks targeted the three because they were Muslims. The two female victims wore head scarves.

“No one in the United States of America should ever be targeted because of who they are, what they look like, or how they worship. Michelle and I offer our condolences to the victims’ loved ones,” said Obama in a statement Friday. “As we saw with the overwhelming presence at the funeral of these young Americans, we are all one American family.” Obama’s father was a Muslim and the president spent some of his childhood in Indonesia, a predominantly Muslim country.

About 5,000 people attended the funerals for the two sisters Abu-Salha and Barakat, who was newly married to Yusor. Obama said her words should inspire us all, and quoted her: “Growing up in America has been such a blessing. It doesn’t matter where you come from. There’s so many different people from so many different places, of different backgrounds and religions —but here, we’re all one.”

On social media, he posted a picture of a handgun he said was fully loaded, and made disparaging statements about religion, including Christianity and Islam. He had been twice divorced, and he had an arsenal of a dozen firearms in the home he shared with his third wife, along with a large stash of ammunition. His wife has announced that she, too, will seek a divorce.

Records filed in Durham County Superior Court on Friday list items recovered by police from Hicks’ Chapel Hill condominium. The warrants show three handguns, two shotguns, and seven rifles were recovered, in addition to a pistol the suspect had with him when arrested. Police also recovered numerous loaded magazines, cases of ammunition, and a military-style AR-15 carbine.

Eight spent shell-casings were found in the neighboring apartment where the slain young couple lived.