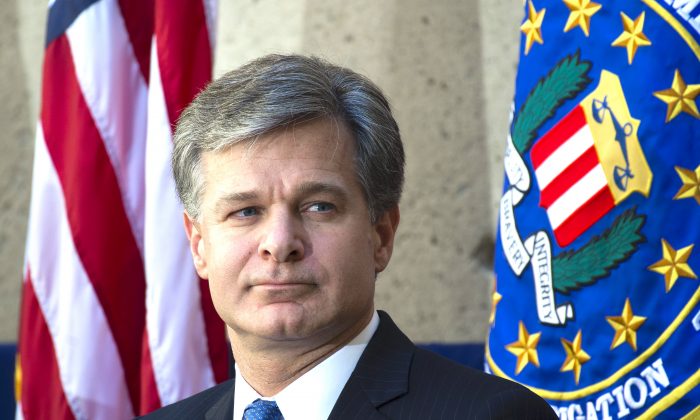 FBI Director Christopher Wray revealed on July 18 that the FBI is investigating Chinese economic espionage cases in all 50 U.S. states, and that China is regarded as the “most significant” long-term threat to the United States.

Wray, speaking to NBC at the Aspen Ideas Forum on July 18, said Chinese espionage “covers everything from corn seeds in Iowa to wind turbines in Massachusetts and everything in between.”

The Chinese Communist Party (CCP) is using a set of unconventional warfare methods against the United States, designed to achieve the goals of war without the need for troop-on-troop combat. This includes subversive methods to infiltrate and undermine U.S. institutions, propaganda operations to alter public perception, economic warfare programs to steal from the U.S. economy, and more.

Many of these strategies were outlined in a 1999 Chinese military book, “Unrestricted Warfare.” Many of the tactics also pull from older subversive methods used by the Soviet Union, and go beyond them.

Subversion is used by communist regimes to gradually seize control of a country by attacking and undermining the institutions that make it function, driving its population into conflict, in order to bring the country to a state of crisis that allows for outside intervention, either through foreign invasion or a new political structure.

It is also designed to gradually achieve the goal of creating a communist state by subverting and destroying religious belief, morality, and tradition through infiltrating institutions, and by creating advocacy movements, among other methods.

Commenting on the hearing, Frank Gaffney, president and CEO of the Center for Security Policy, said in an interview with Secure Freedom Minute Radio that “amidst the political jockeying in Washington to establish which party is more hostile to Vladimir Putin’s Russia, an even more ominous threat is getting scant attention.”

“Fortunately, the fact that Communist China has actually been waging ‘unrestricted warfare’ against the United States for decades is the focus of an important congressional hearing today,” Gaffney said.

“The hearing is particularly timely in light of President Trump’s efforts to use tariffs, investment restrictions, and other measures to fight back. It may be one of our last chances to do so.”

The CCP’s unrestricted warfare system is often highlighted in discussions about Chinese cyber threats and theft of intellectual property, but the strategies go far beyond this.

A related strategy, inducted into the official strategies of the CCP’s People’s Liberation Army, is its “Three Warfares” system, which includes psychological warfare designed to alter how people interpret information, media warfare to control what information is available, and legal warfare to manipulate international court systems.

While the subversive and unconventional warfare tactics used by the CCP are coming to light, the broader picture is still not widely understood, according to Casey Fleming, CEO of BlackOps Partners Corp., a global intelligence strategy and cyber advisory company.

“Most senior leaders and lawmakers are unaware of the deep extent of espionage and vast infiltration Chinese government has perpetrated in all sectors over the past two decades,” Fleming said.

“It is part of the Chinese regime’s strategy to feign partnerships while gutting the American economy of stolen innovation, trade secrets, and intellectual property from every sector: business, military, government, academia, and even think tanks and law firms.”

According to Fleming, while Chinese espionage cases are now being investigated across the United States, the cases need to be understood in the broader context of the CCP’s strategies.

“Extensive Chinese espionage is tied to a broader strategy to subvert the United States ideologically and to eventually overtake the United States both financially and militarily through robust and consistent intellectual property theft, under the guise of plausible deniability,” he said.

Wray, speaking at Aspen, also briefly explained this concept, stating that China is “trying to position itself as the sole dominant superpower” and that “they’re trying to replace the United States in that role.”

“I think China, from a counterintelligence perspective, represents in many ways the broadest, most challenging, most significant threat we face as a country,” Wray said.

“The volume of it, the pervasiveness of it, the significance of it, is something that I think this country cannot underestimate.”