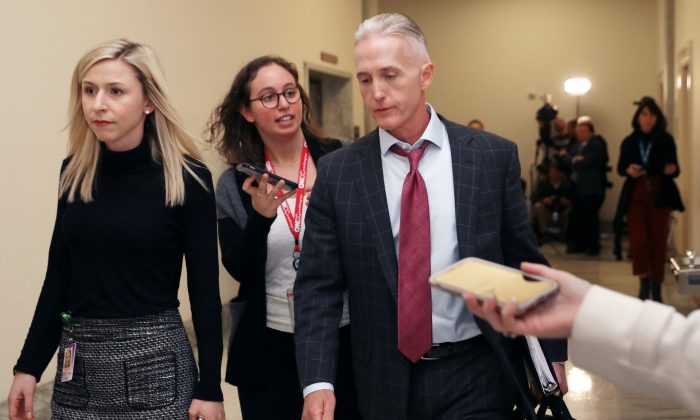 The FBI is in possession of a transcript that may be a “game-changer,” even for Americans who “hate” President Donald Trump, according to former Rep. Trey Gowdy (R-S.C.).

Gowdy told Fox News on May 19 that the bureau has a record of a conversation between former Trump campaign adviser George Papadopoulos and an informant sent to target him. While several transcripts exist, one, in particular, “has the potential to actually persuade people,” Gowdy said, adding that the transcript includes exculpatory evidence that the FBI didn’t provide to a court.

“Very little in this Russia probe, I’m afraid, is going to persuade people who hate Trump, or who love Trump, but there is some information in these transcripts that I think has the potential to be a game-changer if it’s ever made public,” Gowdy said.

Gowdy, who was part of the joint House Judiciary-Oversight committee inquiry into decisions made and not made by the Department of Justice and the FBI regarding the 2016 presidential election, said that “the government has to tell the whole truth to the court when you are seeking permission to spy, or do surveillance, on an American.”

The New York Times revealed in April that the FBI sent a spy to target Papadopoulos after opening a counterintelligence investigation into the Trump campaign. The female spy, Azra Turk (not her real name), pretended to be someone else in a bid to draw incriminating information from Papadopoulos.

Turk is the second known spy who the FBI used to target the Trump campaign. In May 2018, Stefan Halper was identified as an FBI asset who targeted Papadopoulos and other Trump campaign associates.

On May 19, Papadopoulos wrote on Twitter that the FBI “illicitly” obtained a Foreign Intelligence Surveillance Act (FISA) warrant to spy on him. He also suggested that declassification of transcripts would expose an international spy conspiracy to remove Trump from office.

“Get ready for the transcripts to be released outing the spies I detail in my book. The Comey FBI/Brennan CIA/MI6 had one goal: take down Trump through Papadopoulos,” he wrote.

“I guarantee you as declassification and the new investigations ramp up into DOJ/intel agency corruption, ALL the bizarre assets who were running into me from 2015-2017 will try and discredit me. We already see a coordinated media strategy by the higher ups. Only a matter of time,” he added.

When Gowdy’s committee interviewed Papadopoulos in October 2018, he wasn’t aware that transcripts existed of his interactions with FBI assets. Rep. Mark Meadows (R-N.C.) asked a barrage of questions to determine if Papadopoulos was aware that the FBI had transcripts that could contain exculpatory evidence.

Meadows specifically asked if Papadopoulos was aware of transcripts of conversations he had with Halper, Australian diplomat Alexander Downer, and Maltese professor Joseph Mifsud.

Special counsel Robert Mueller charged and secured a conviction against Papadopoulos for lying about his interactions with Mifsud. Mueller portrayed Mifsud as having ties to Russia, but publicly available evidence reveals Mifsud’s extensive ties to Western intelligence and the FBI.

Meadows told Fox News on May 20 that Trump intends to soon declassify a trove of documents related to spying on his campaign, including the Papadopoulos transcripts.

“I think the delay is over,” Meadows said. “I think the president is serious. I’ve spoken to him recently and I think declassification is right around the corner, and, hopefully, the American people will be able to judge for themselves.”