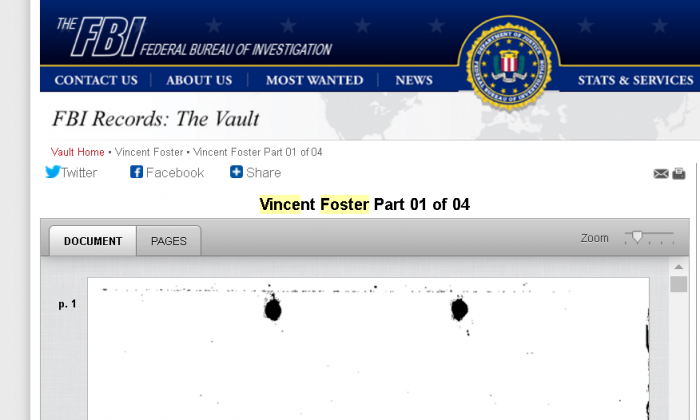 The files, however, were released years ago
By Jack Phillips

The FBI’s declassified files pertaining to the investigation into the death of Vincent “Vince” Foster, who was a Deputy White House Counsel during former president Bill Clinton’s administration were being shared en masse on Tuesday morning.

The declassified files were not released on Nov. 2, but they were posted several years before. According to an Archive.org record, the webpage pertaining to Foster’s investigation was first updated in May 2011.

Foster’s death has been the focus on a number of online theories—the primary being that Hillary and Bill Clinton ordered his murder.

On Twitter, users apparently thought the FBI’s Foster files were released on the morning of Nov. 2. The information was being passed around on Twitter, but it’s unclear exactly why.

Foster’s July 1993 death was ruled a suicide, which was confirmed by five governmental organizations. According to the Washington Post, Foster struggled with depression. He was found dead of a gunshot wound in Fort Marcy Park, a federal park in Virginia.

According to the FBI’s description, Foster was “depressed by critical media comments” and after his death, “U.S. Park Police led the investigation into Foster’s death. This release details FBI assistance in the investigation, including information concerning a letter written by Foster, handwritten case notes, and the medical examiner’s report that ruled his death a suicide.”

Earlier this year, Foster’s family criticized Donald Trump for bringing up his death in an interview. “Trump cynically, crassly and recklessly insinuated that my brother, Vincent W. Foster Jr., may have been murdered because ‘he had intimate knowledge of what was going on’ and that Hillary Clinton may have somehow played a role in Vince’s death. How wrong. How irresponsible,” wrote Sheila Foster Anthony, his sister, for the Washington Post on May 26. “How cruel.”