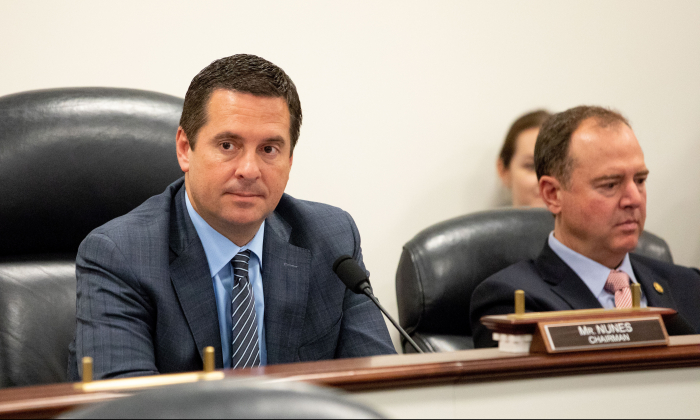 Officials at the FBI and the Department of Justice (DOJ) are actively obstructing a congressional investigation into the origins of the counterintelligence probe into President Donald Trump’s election campaign, according to the chairman of the House Intelligence Committee, Rep. Devin Nunes (R-Calif.).

Nunes says the obstruction is an attempt to run the clock until November when they hope that Democrats take over the House of Representatives and shut down Republican-led investigations.

In its oversight role, the House Intelligence Committee since last year has been investigating the actions of the FBI and the DOJ before the 2016 election. Nunes said in a podcast run by fellow Rep. Sean Duffy (R-Wis.) that the committee has faced months of obstruction by the departments. Nunes said he is “absolutely” sure that officials at FBI and DOJ are trying to run down the clock.

“One hundred percent: they are putting all their chips on that the Republicans will lose the House and all of these investigations will shut down,” Nunes said.

According to Nunes, he and the committee are regularly informed about sensitive counterintelligence investigations by the FBI. But in the case of the bureau’s probe into the Trump campaign, neither the committee nor he was informed when the operation, codenamed “Crossfire Hurricane,” was started on July 31, 2016.

When it became apparent that the FBI was investigating the Trump campaign, Nunes requested documents into how the probe was started. A leak to the media at the time indicated that a Five Eyes intelligence product was used to start the probe. Five eyes information, which comes from America’s trusted partners—Canada, the United Kingdom, Australia, and New Zealand—is considered “solid intelligence” Nunes said.

But after months of stonewalling, Nunes found out that the FBI and DOJ had no intelligence from Five Eyes. Furthermore, the intelligence used to start the investigation into Trump campaign volunteer George Papadopoulos was not an official intelligence product—it was unlike anything Nunes had seen before.

“The best disinfectant for this is going to be sunlight and clear transparency,” Nunes said, urging Trump to declassify the relevant documents.

The intelligence committee is now looking into events preceding the start of Crossfire Hurricane on July 31, 2016. Nunes said that the committee has uncovered evidence of a government operation contacting Trump campaign associates in early 2016.

Nunes blamed the media for allowing obstruction to go on for so long, saying that if similar acts were discovered after President Barack Obama’s election, there would be crowds surrounding the offices of the DOJ and the FBI and people going to jail.

“This is what’s so bad and so corrupt about the media and why I’m so worried about the future of our country,” Nunes said. “Because without a free, fair, and open media, we have a major problem in this country. Because the media is what we count on to bring the transparency to government.”

The intel chair believes the FBI knew early on that Trump did not collude with Russia, given the significant capabilities of U.S. intelligence. Instead, Nunes believes that the text messages of controversial FBI officials Peter Strzok and Lisa Page indicate that a group at the bureau was weaving an “obstruction” narrative in order to oust the president.

“It’s tough to read all that and not to see that the FBI, even before Mueller, was trying to set up for impeachment,” Nunes said. “And it looks like they created this model of obstruction of justice.”

Special counsel Robert Mueller took over the FBI’s counterintelligence probe in May 2017. Mueller was tasked with investigating allegations of collusion between the Trump campaign and Russia as well as Moscow’s meddling in the 2016 election. To date, Mueller’s probe has not produced any evidence or indictments related to collusion.

Trump has repeatedly slammed the special counsel’s probe as a “witch hunt” and a “hoax.”

Nunes also pointed to the double standard. While Mueller is investigating whether Trump received Russian dirt on Clinton, it has become clear, through oversight investigations, that Clinton paid for Russian dirt on Trump, Nunes noted. The dirt in Clinton’s case is the so-called Steele dossier, which was paid for by the Clinton campaign and the Democratic National Committee. The dossier was compiled by a former British spy who used sources with close ties to the Kremlin.

While Duffy suggested that Nunes hold the DOJ and FBI officials in contempt of Congress, Nunes said that may help them run out the clock for the midterm elections.

“So there is the challenge. If you hold in contempt, they have legal capabilities there too,” Nunes said. “That’s another way they could run out the clock. So in some ways they might be trying to get us to hold them in contempt. So we have to be careful about how you go.”

The intel chair sees the appointment of a second special counsel or an independent prosecutor as the solution to the stalemate. The person would have to have no ties to the leadership within the FBI and DOJ, Nunes said.

Nunes made the remarks on the heels of the indictment by Mueller of 12 Russian intelligence officers for hacking the Democratic National Committee. Nunes noted that the information covered in the indictment matches what his committee released in a report last year. Nunes said the timing of the filing of the indictment, just days before Trump’s meeting with Russian Vladimir Putin, is “more than odd” and “suspicious.”