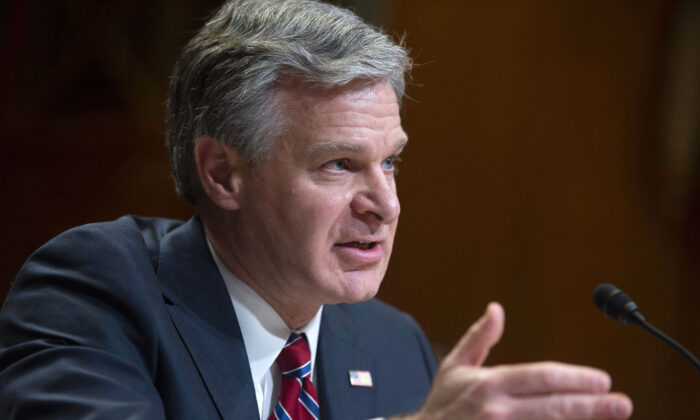 FBI Director Christopher Wray speaks during a Senate Appropriations Subcommittee hearing on the fiscal year 2023 budget for the FBI at the U.S. Capitol in Washington on May 25, 2022. (Bonnie Cash/Pool via Getty Images)
Executive Branch

At a Senate Judiciary Committee hearing on Aug. 4, FBI Director Christopher Wray said he found “deeply troubling” a whistleblowers’ report alleging a concerted effort within the agency to discredit accurate information about Hunter Biden during the bureau’s investigation in 2020.

The report claiming widespread efforts within the FBI to downplay or mishandle information about the son of President Joe Biden was made public by Sen. Chuck Grassley (R-Iowa), the ranking member on the Senate Judiciary Committee, in a letter (pdf) he sent to Wray and Attorney General Merrick Garland on July 25.

“The allegations provided to my office appear to indicate that there was a scheme in place among certain FBI officials to undermine derogatory information connected to Hunter Biden by falsely suggesting it was disinformation,” the letter says, noting that “the volume and consistency of these allegations substantiate their credibility.”

Based on the timeline set forth in the letter, “the FBI developed information in 2020 about Hunter Biden’s criminal financial and related activity.”

Grassley pointed to Washington Field Office Assistant Special Agent in Charge Timothy Thibault, accusing him of potentially violating federal laws and rules established by the FBI.  To wit, Grassley alleged there is evidence that Thibault had partisan bias when handling investigations into the Trump campaign and Hunter Biden.

At the hearing, when asked by Sen. John Kennedy (R-La.) to confirm the authenticity of the allegations, Wray dodged the question.

“I want to be very careful not to interfere with ongoing personnel matters,” Wray said, but admitted that the disclosures were “deeply troubling.”

Also according to whistleblowers, the FBI came into possession of information about Hunter Biden’s “criminal financial and related activity” in 2020, which prompted FBI supervisory intelligence analyst Brian Auten to open an assessment in August 2020.

“Thibault allegedly ordered the matter closed without providing a valid reason as required by FBI,” the letter said. FBI officials, including Thibault, then tried to “improperly mark the matter in FBI systems so that it could not be opened in the future.”

On the Senate floor, Wray appeared to deflect the question posed by Kennedy of whether Thibault is, or was, working on the FBI investigation of Hunter Biden.

“The investigation that you’re referring to is going to—and I need to be a little bit careful because we’re talking about an ongoing investigation—is being run out of our Baltimore field office, working with the Delaware U.S. attorney who’s a holdover from the prior administration,” Wray responded.

Potential Violation of the Hatch Act

His remarks came following Grassley’s request to have Thibault investigated, based on the concerns that the agent had demonstrated “a pattern of active public partisanship,” in violation of his “ethical obligation as an FBI employee.”

“I will tell you that what you’re describing is not representative of the FBI that I see up close every day in this country, where I see patriots working their tails off with tremendous integrity and objectivity.”

The whistleblower disclosure came to light amid reports that the federal investigation, led by the Delaware U.S. attorney’s office, was nearing a critical juncture.

Frank Fang and Jack Phillips contributed to this report.