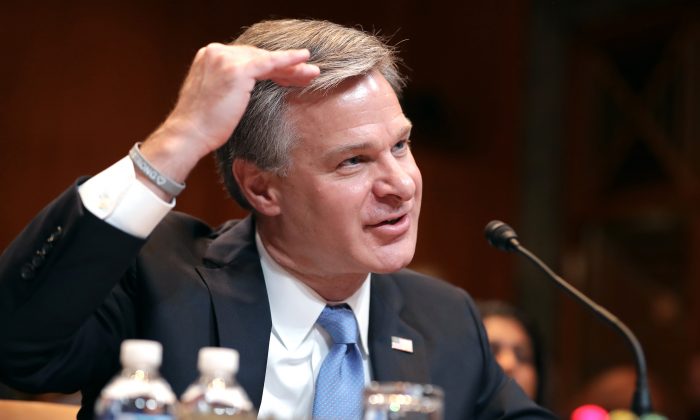 Federal Bureau of Investigation Director Christopher Wray testifies before the Senate Appropriations Committee on May 07, 2019. (Chip Somodevilla/Getty Images)
US News

Contrary to media reporting, Wray did not deny that spying on the Trump campaign occurred
By Jeff Carlson

FBI Director Christopher Wray, testifying before a Senate Appropriations subcommittee on May 7, was asked a series of questions on the topic of spying and surveillance on the Trump campaign.

Wray’s answers to the questions posed by Sen. Jeanne Shaheen (D-N.H.) have been widely misrepresented and misreported. Media outlets such as The Washington Post and CNN published headlines claiming that Wray had said there was no evidence of spying on the Trump campaign. There also were multiple claims that Wray had directly refuted statements by Attorney General William Barr.

The problem is, that wasn’t what Wray had actually said. And some of his answers came from questions that had nothing to do with the Trump campaign.

With regard to Wray’s comments on ”spying,” he was actually responding to a question regarding the FBI’s normal operations:

Sen. Jeanne Shaheen: “I’d like to follow up on Senator Moran’s question about the hearing we had with Attorney General Barr. Because, I was very concerned by his use of the word ‘spying’ which I think is a very loaded word. It conjures up a criminal connotation. I want to ask you and I’d appreciate a ‘yes’ or ‘no’ answer if possible.

“When FBI agents conduct investigations against alleged mobsters, suspected terrorists, other criminals, do you believe that they’re engaging in ‘spying’ when they’re following FBI investigative policies and procedures?”

Christopher Wray: “Well, that’s not the term I would use.”

Wray’s comment was immediately seized upon by many in the media and led to claims that the FBI director had testified there was no spying in relation to the FBI’s investigation of the Trump campaign. Politico even led with the headline “FBI’s Wray: Spying is ‘not the term I would use’ to describe Trump campaign probe.” Note that Wray was responding to the everyday activities of the FBI, not specifically to the activities surrounding the FBI’s counterintelligence investigation into the Trump campaign.

There have also been a number of articles published claiming that Wray was publicly taking issue with Barr’s use of the word “spying,” although that isn’t what Wray said.

Shaheen continued with her questioning and Wray provided an answer that is getting little attention, although it probably should. Wray stated that he was less concerned with what the investigative activity was actually termed and far more concerned with the intent that lay behind the investigations.

The questioning then shifted more directly to the FBI’s investigation of the Trump campaign and efforts by the FBI to obtain warrants. Wray noted that there had been “a number” of unspecified warrants issued:

Sen. Shaheen: “Did FBI agents get warrants for information as part of their counter-surveillance investigation into Russian interference in the 2016 election?”

Mr. Wray: “Well, I want to be a little bit careful about what I can discuss here, but I think it’s been publicly disclosed that there were a number of relevant warrants that were secured in the course of that investigation.”

Shaheen then asked Wray if the FBI spied on the Trump campaign. Wray was very careful in his answer. Note that, despite the many misleading headlines claiming otherwise, this is the only place where Shaheen actually asked directly about spying in relation to the Trump campaign:

Sen. Shaheen: “And do you believe, Director Wray, that the FBI and its agents spied into the 2016 presidential campaign operation?”

Mr. Wray: “Well, again, I want to be careful about how I answer that question here because there is an ongoing inspector general investigation. I have my own thoughts based on the limited information I’ve seen so far but I don’t think it would be right or appropriate for me to share those at this stage, because I really do think it’s important for everybody to respect the independent inspector general’s investigation, which I think this line of questioning starts to implicate and I think it’s very important for everybody to be able to have full confidence in his review.”

Wray confirmed the ongoing FISA investigation being conducted by Justice Department Inspector General Michael Horowitz but was careful not to comment on it. Nor did Wray confirm or deny spying on the Trump campaign. Also of note, Wray did not in any way dispute Shaheen’s use of the word “spied.”

Shaheen tried one last time to establish that there had been no illegal surveillance of the Trump campaign. Wray’s answer provided a host of additional headlines:

Sen. Shaheen: “At this time do you have any evidence that any illegal surveillance into the campaigns or individuals associated with the campaigns by the FBI occurred?”

Mr. Wray: “I don’t think I personally have any evidence of that sort.”

Wray’s answer is given greater context in video form, in which it can be seen that Wray paused prior to answering and emphasized the words “I personally,” but the damage was done and the sound bite obtained.

The FBI isn’t investigating itself and Wray hasn’t been tasked with investigating potential FISA abuse or FBI activities during the FBI’s counterintelligence investigation of the Trump campaign. That matter has been left to Horowitz, whose report is currently scheduled to be delivered before the end of June.

The FISA investigation is one of several investigations coming to an end. There is also the matter of the 14 criminal referrals made by special counsel Robert Mueller as an outgrowth of his investigation. Two of these, for Manafort and for former Obama White House counsel Greg Craig, are publicly known. The other 12 haven’t been revealed and are fully redacted in the Mueller report.

Barr recently acknowledged that there were a variety of investigations related to the investigations into the Trump campaign, during testimony before a House Appropriations subcommittee, noting, “One of the things I want to do is pull together all the information from the various investigations that have gone on.”