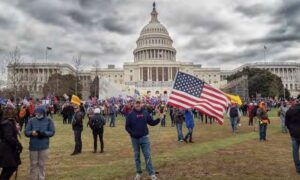 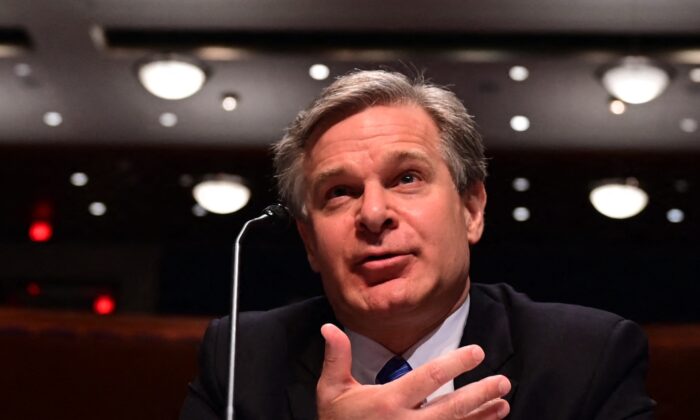 FBI Director: At Least One Individual Brought Gun Inside Capitol on Jan. 6

'For the most part, the weapons were weapons other than firearms'
By Isabel van Brugen
biggersmaller
Print

FBI Director Chris Wray on Thursday testified that at least one individual was found with a gun inside the U.S. Capitol building on Jan. 6.

Wray made the remarks during an oversight hearing held by the House of Representatives Judiciary Committee, suggesting that “serious charges” are still coming in the criminal investigation of the Capitol breach.

“This is a very ongoing investigation and there’s a lot more to come,” Wray said of a subgroup of protesters who are being investigated for bringing weapons into the Capitol building when it was breached on Jan. 6 . “I would expect to see more charges—some of them maybe more serious charges.”

Wray testified that a lot of the arrests and “more significant” charges that are coming out of the investigation currently are individuals who brought “all sorts of weapons” inside the Capitol building, including Kevlar, tactical vests, and bear spray.

“I can think of at least one instance where there was an individual with a gun inside the Capitol, but for the most part, the weapons were weapons other than firearms,” Wray responded.

Wray said that the FBI had divided the tens of thousands of protesters who were at the Capitol on Jan. 6 into three groups: “peaceful, maybe rowdy” protesters who didn’t participate in the breach and made up the biggest group, a second group who engaged in criminal trespass of the Capitol Building, and a third group—the smallest in number—who were responsible for carrying weapons into the Capitol.

Close to 500 arrests among those in the second and third groups have been made so far in connection with Jan. 6, Wray told the committee. The Department of Justice (DOJ) previously said that the majority of cases are related to entering a restricted building, obstruction of an official proceeding, and civil disorder.

The DOJ last month accused a Maryland man of carrying a semi-automatic handgun and ammunition on Capitol grounds on Jan. 6, among nine other charges. However, it isn’t clear whether Wray was testifying about this individual.

The Justice Department didn’t immediately respond to a request for comment by The Epoch Times on the matter.

A superseding indictment from the DOJ alleges that Christopher Alberts was seen carrying an Taurus G2C semi-automatic handgun on restricted Capitol grounds without a licence around 7:25 p.m. on Jan. 6 where the vice president and vice-president elect were visiting, and that he also had in his possession a “large capacity ammunition feeding device.”

Alberts has pleaded not guilty on all counts.

The FBI director also testified that the law enforcement agency considered the events that unfolded on Jan. 6 an act of “domestic terrorism.” When asked by Rep. Eric Swalwell (D-Calif.) whether the events on Jan. 6 at the Capitol were an “insurrection,” Wray replied that he believes it would be inappropriate to describe the breach as such.

“In my role as FBI director, because that’s a term that has legal meaning, I really have to be careful about using words like that,” Wray said, adding that what he says could impact ongoing criminal cases.

Democratic lawmakers pushed the narrative that the Jan. 6 breach was an “insurrection” largely during the January impeachment effort against former President Donald Trump. No one who participated in the breach has been charged with insurrection.