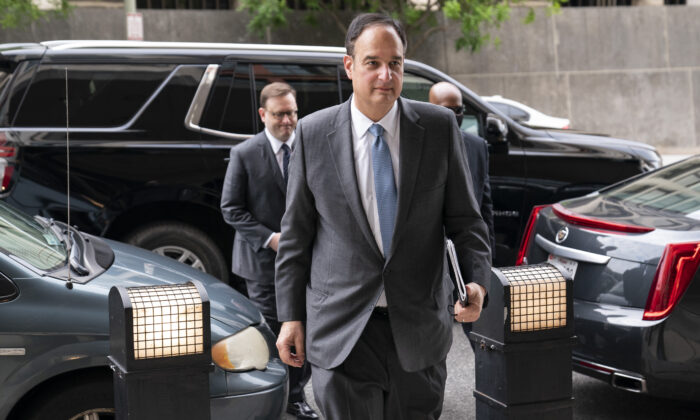 Michael Sussmann, a cybersecurity lawyer who represented the Hillary Clinton presidential campaign in 2016, in Washington on May 16, 2022. (Evan Vucci/AP Photo)
US News

WASHINGTON—FBI agents tasked with analyzing claims about Donald Trump and Russia took less than a day to figure out that the data didn’t support the allegations, one of the agents testified in federal court on May 17.

Agent Scott Hellman was part of the team that examined white papers and data on thumb drives handed in 2016 to FBI lawyer James Baker by Michael Sussmann, an attorney who was representing the campaign of Hillary Clinton—Trump’s rival for the presidency.

On the first day of Sussmann’s trial for allegedly lying to the FBI when he said he wasn’t bringing the information on behalf of a client, Hellman told the court that he and another agent took less than a day to ascertain that the information didn’t support the allegations that Trump’s business and Russia’s Alfa Bank had a secret connection.

“I think the person who drafted [the main white paper] was suffering from a mental disability,” Hellman said.

Before filings in the Sussmann case, the FBI’s determination regarding the allegations was unclear. In one of the filings, special counsel John Durham said that the bureau and the CIA had concluded that the allegations were “untrue and unsupported.”

He also said the bureau did not ultimately reach a conclusion regarding the data’s accuracy or whether it might have been entirely or partially fabricated, but that the CIA determined in early 2017 that the data were not “technically plausible” and were “user created and not machine/tool generated.”

On the stand, Hellman said when he got the thumb drives and white papers, he examined them to see if there was any hacking involved before doing a technical review to compare it with the narrative outlined in the primary paper.

He called the methodology the paper’s authors used “questionable” and said the claim of a secret backchannel “just didn’t make sense to us.”

“Why would a presidential candidate put their own name on a supposedly secret domain name?” he said.

Hellman said he was frustrated when he described Baker’s refusal to reveal the identity of the person who provided the data, other than saying it was from “a sensitive source.” He found that unusual.

During cross-examination, Hellman was questioned by Sean Berkowitz, one of Sussmann’s lawyers.

Berkowitz wondered about Hellman saying he didn’t know where Baker got the data, pointing out that in internal FBI chats, one agent named Sussmann as the source, and in others, agents described the primary paper as “the DNC paper.” DNC stands for Democratic National Committee. The committee was in 2016 another client of Perkins Coie, Sussmann’s law firm.

Hellman said he would have made clear where it came from, had he known. He said he wasn’t aware that other agents were calling it a DNC paper.

While Hellman ultimately penned a memorandum detailing concerns with the data, the FBI’s counterintelligence division decided to investigate the allegations anyway.