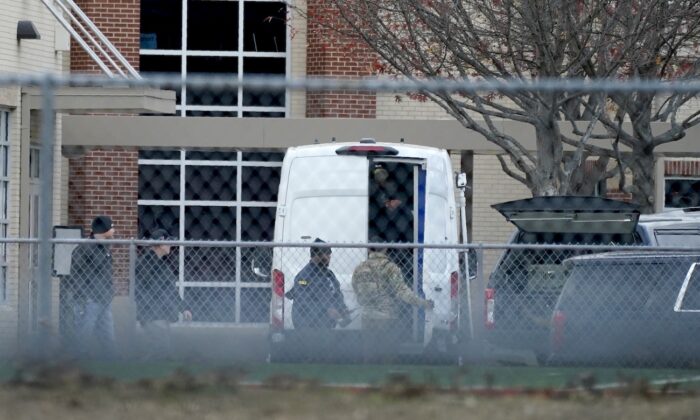 “Prayers answered. All hostages are out alive and safe,” the governor announced on Twitter.

Abbott’s post came moments after a loud bang and what sounded like gunfire was heard coming from the synagogue—Congregation Beth Israel in Colleyville, Texas, which is about 15 miles northeast of Fort Worth.

Colleyville Police Chief Michael Miller confirmed at a press conference late Saturday that the suspect was dead. “Around 9 p.m., the [hostage rescue team] breached the synagogue, they rescued the three hostages, the suspect is deceased.”

FBI crisis negotiators were trying to negotiate with the suspect, according to the local police department in Colleyville in a statement.

Later in the night, the department announced on Twitter, “Update at 9:55pm: The SWAT situation in Colleyville is resolved and all hostages are safe. We continue to work in partnership with the FBI to finalize all details.”

The situation started around 10:40 a.m. when the Colleyville Police Department received a call for service in the 6100 block of Pleasant Run Road—the address of the synagogue. “Officers arrived on scene and observed an emergency situation that warranted evacuation of the surrounding areas and an external perimeter was established,” the department said.

Shortly after 5 p.m. local time, a male hostage was “released uninjured” from the “major incident,” it added said. “This man will be reunited with his family as soon as possible and he does not require medical attention. FBI Crisis Negotiators continue contact with the subject.”

On the Facebook livestream of Saturday’s service at the synagogue, a man could be heard ranting and talking about religion at times, reported the Fort Worth Star-Telegram. The video did not show what was happening in the building.

Shortly before 2 p.m., the man said, “You got to do something. I don’t want to see this guy dead.” Moments later, the feed cut out. A Meta company spokesperson later confirmed that Facebook had removed the video, reported The Associated Press.

The Colleyville Police Department was on the scene with FBI’s Dallas Field Office, the Texas Department of Public Safety, North Tarrant Regional SWAT Team, and other neighboring agencies.

In a statement on Twitter, Texas Gov. Greg Abbott said he was monitoring the situation through the Texas Department of Public Safety. He described it as a “tense situation” and that the Texas DPS is “working with local and federal teams to achieve the best and safest outcome.”

Israeli Prime Minister Naftali Bennett said he was monitoring the situation closely. “We pray for the safety of the hostages and rescuers,” he wrote on Twitter.